A little piece of history was made by Blackpool Heritage Tram Tours on Sunday 19th February when, for the first time ever, modified Balloon car 713 was used on the basic ‘blue’ heritage timetabled service. This saw the tram employed between Pleasure Beach and North Pier for the day, working two trips to Cabin, and the other tram used was sister Balloon 717. This was also the first time that a tram carrying an all-over advert had been used on the ‘blue’ service.

Despite being extensively rebuilt in the mid-2000s and then further modernised in 2010 with widened centre entrance porches and driver-operated plug doors, 713 has been an elusive tram for the last few years. After a few guest appearances on the heritage service in May 2013, it wasn’t used again until October 2015 when it was surprisingly used on ordinary stage carriage work on a small number of occasions. 713 ran just twice last year, and its latest outing coupled with use on both days of the first ‘Gold’ operating weekend in January, means that it has already been used more in 2017 than it was in the whole of 2016!

713‘s unexpected use on heritage tours on February 19th is just the latest in a growing number of such appearances by the modified ‘B Fleet’ Balloons of late. No doubt the cold winter weather makes the use of these heated vehicles more appealing, whilst a few defective trams and limited access to the Rigby Road depot due to ongoing roof repair work have further restricted the number of options for trams to choose from. It seems that this tram and its stylish pink, purple and white advert livery for the Houndshill shopping centre could well be making a few further appearances on the tramway although its long-term future use in this guise is by no means guaranteed – so catch it if you can! 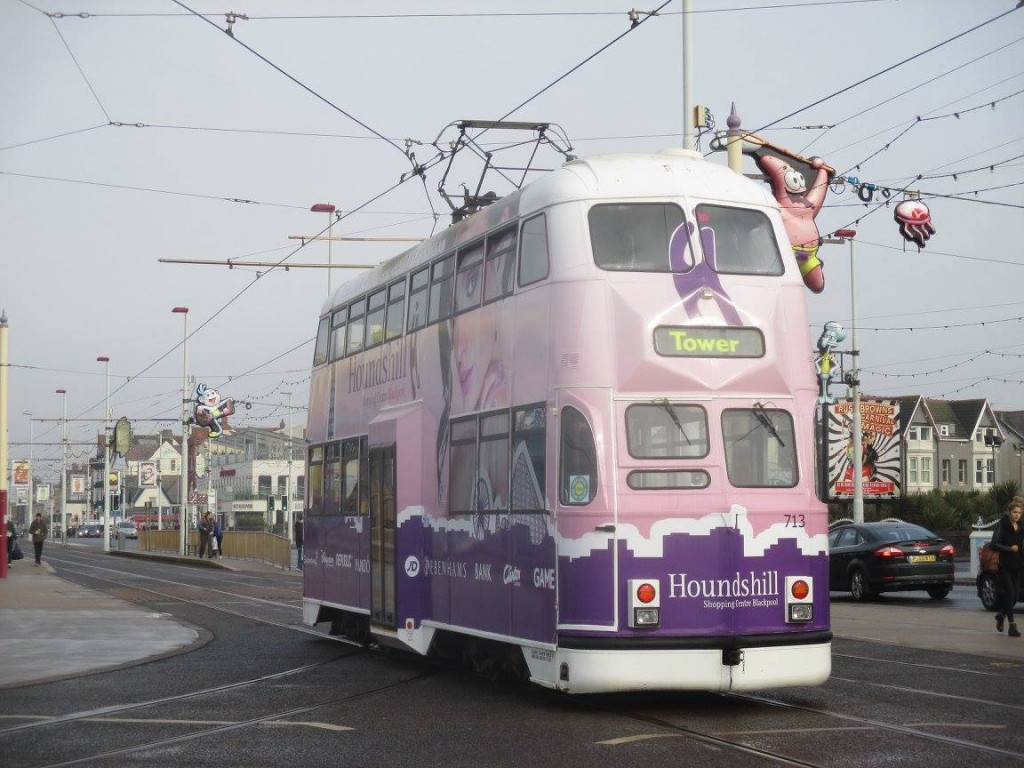 713 pulls away from Pleasure Beach whilst in use on heritage service on 19th February. (Photo by Rob Bray)

11 Responses to Pink on blue!