Posted on Saturday 18 February 2017 by Gareth Prior

We take a look at one of the original non standard liveries on Croydon Tramlink as part of today’s edition of Picture in Time with a view of 2550 in its First colours.

2550 was delivered to Therapia Lane on Monday 10th May 1999 and rather than the usual secrecy and unloading behind closed doors families of staff members were invited along to witness the unloading – including children being invited to push it into the shed once it was off the transporter. The whole unloading process was also filmed and used in a Tramlink video which could be purchased from the Tramlink shop in the early years of the system. Delivered in the house colours of Red and White was to receive special vinyls in the run-up to the opening of the system with the distinctive colours of First Group adorning the tram from April 2000. The vinyls were fairly short lived being removed in October 2001 at which time 2550 was back in Red and White.

This photo shows 2550 along Addiscombe Road with a line 1 service to Elmers End during 2000. 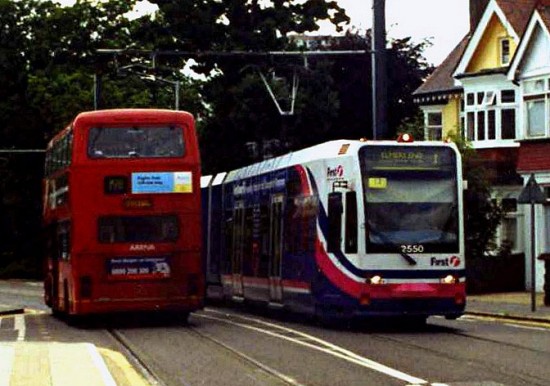