Eight months ago, a rather shabby looking Brush Railcoach 627 left Blackpool’s Rigby Road depot for the final time, having been acquired by a local preservation group. Looking almost totally unrecognisable, 627 made a triumphant return to Blackpool promenade during the evening of Wednesday 22nd August 2012, ready to take its place as a static exhibit at Pleasure Beach for this year’s illuminations display.

As most readers will be aware, 627 is now owned by the Fleetwood Heritage Leisure Trust who have come up with a most imginative project to return this tram to the limelight. The car has been treated to a full repaint at Kirkham Prison, with the inmates helping to work on the tram, which has seen its faded Coral Island advertisement replaced by an equally striking white and gold livery. 627, now labelled as 290 (its pre-1968 fleet number) has been reborn as the Queen’s Diamond Jubilee Tram as a special display for the 2012 illuminations season. The design is very stylish and closely resembles the 1950s Brush car livery, though with gold paint replacing the more familiar green. Other additions such as gold fenders and appropriate signwriting on the bodyside panels have created a stunning exhibit. The windows have also been adorned with artwork created by local schoolchildren, and the side sweeps and end ‘V’ shapes are picked out in lights to further enhance 290‘s appeal to holidaymakers this autumn. One final touch has been the application of fake destinations, ‘North Station Blackpool’, recognising 290’s role as the last tram to run through Blackpool’s town centre.

Following completion of this transformation, 290 was collected by a Scott’s Heavy Haulage lorry on 22nd August to make the short journey to the centre of the Pleasure Beach turning circle, where a short length of track had already been laid in preparation for its arrival. During the day the loop was needed for the heritage tram tours, so the tram spent several hours waiting outside the illuminations depot near Squires Gate. However, a white trolley tower featuring patriotic images painted on circular discs had already been delivered to the Pleasure Beach, rather giving away what was going to happen. Sure enough, after 5:00pm when the heritage cars had been shedded for the day, the amazing sight of 290 being driven on the back of a lorry along the tramway from Starr Gate to Pleasure Beach could be seen!

The unloading process took rather longer than expected, but the Scott’s team carried out the task with their usual professionalism and by around 10:00pm, 290 was finally in position on the siding where it will be displayed for the nine-week illuminations period. With some of these year’s new roadside lights being tested, the illuminating backdrop provided a warm welcome for 290 and it almost felt as though the lights season had begun early!

Since its arrival, 290 has regained its trolley tower which now has four flags fitted atop. The temporary orange barriers placed around its rails have been replaced by a much more attractive wooden fence, matching the one placed in front of the nearby tableaux. The tram looks absolutely fantastic and everyone involved in this project – most notably its owners, HM Prison Kirkham, and the Blackpool Illuminations Department for working together to achieve such an impressive outcome. Hopefully this will just be the beginning of a long and happy life in preservation for 290 which is sure to be a huge attraction during its nine-week stint of display this autumn. 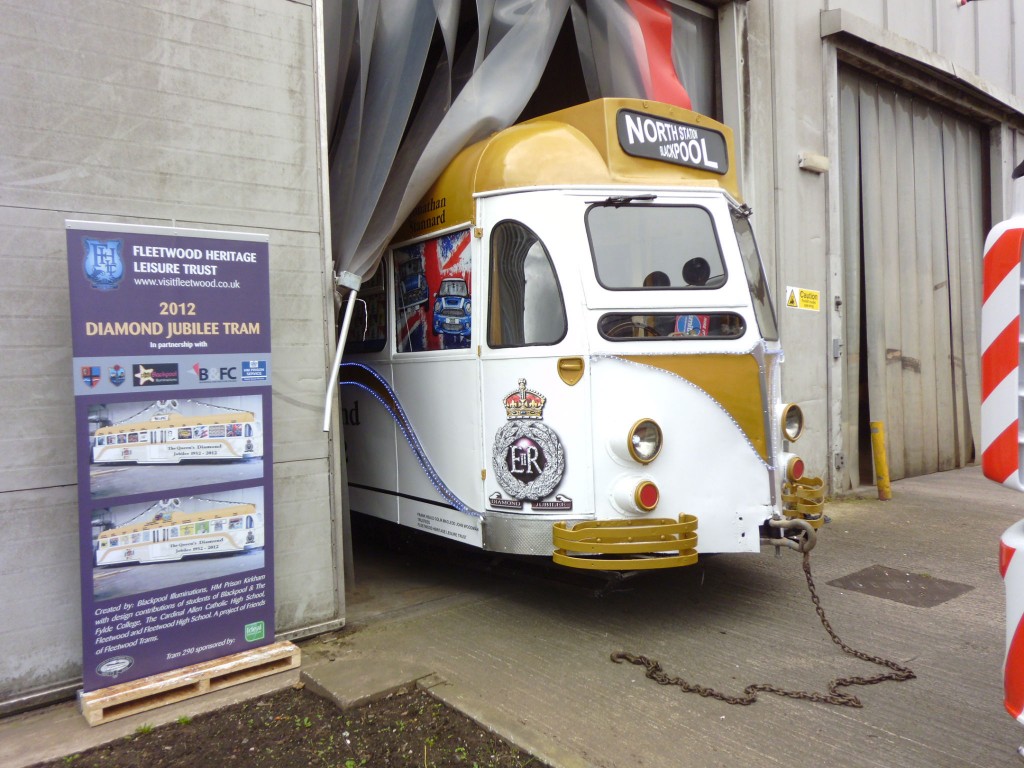 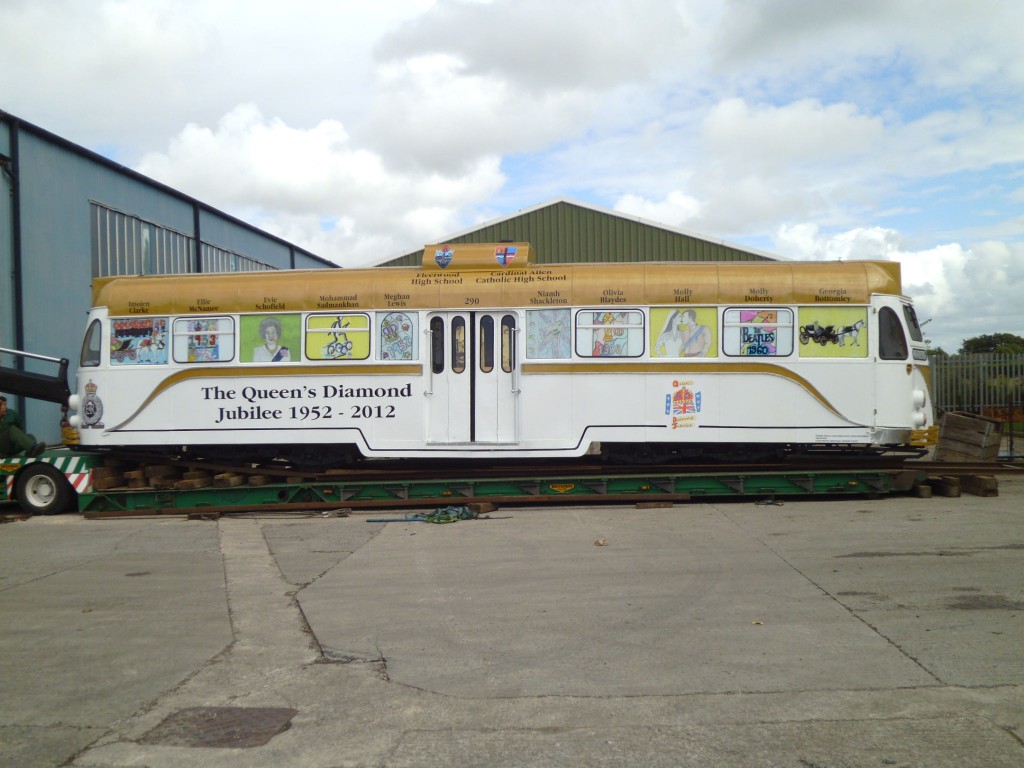 A side view of 290 during the loading process at the prison shows off the ornate commemorative livery to fantastic effect. (Photo courtesey of the Fleetwood Heritage Leisure Trust) 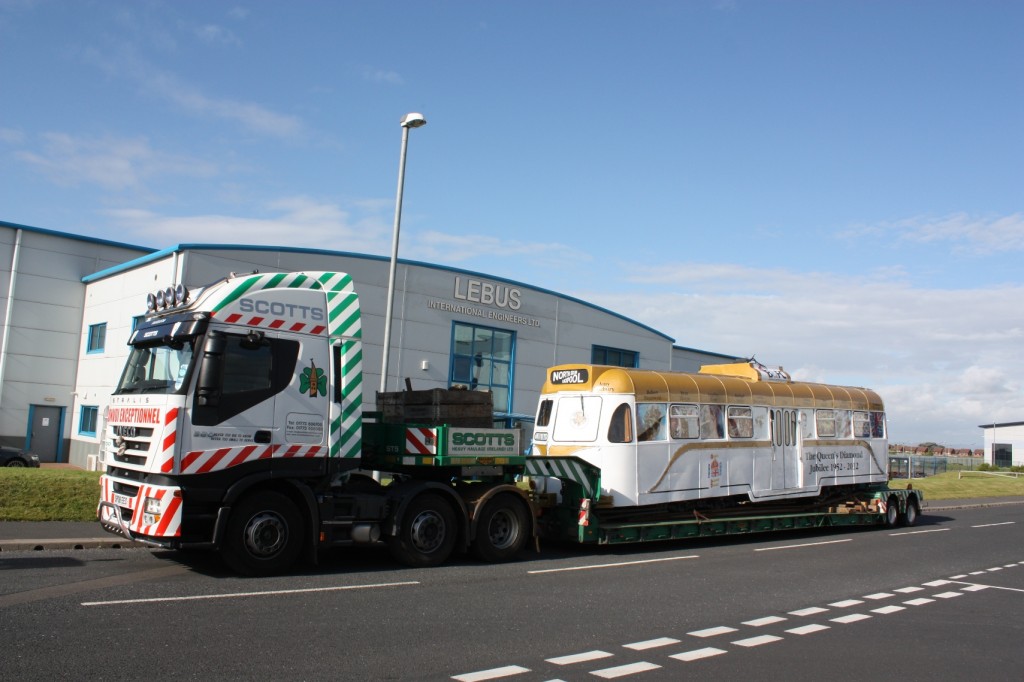 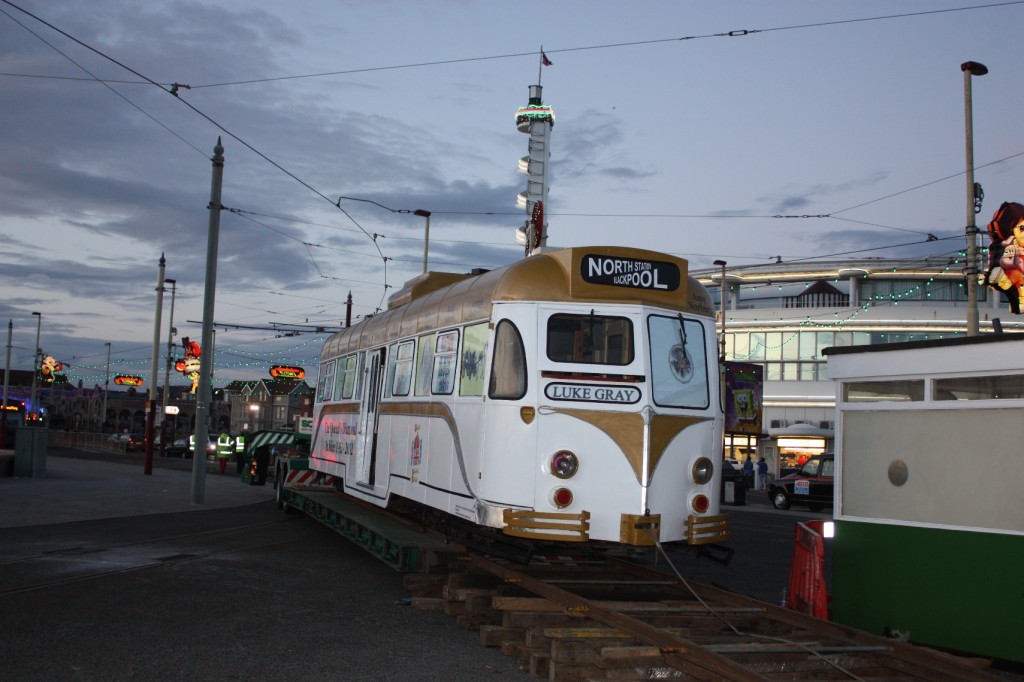 With the illuminations shining brightly behind, 290 is seen being gently coaxed down the ramp from the Scott's lorry onto the new display siding located opposite the Pleasure Beach. (Photo by Andrew Blood)