Posted on Thursday 22 December 2016 by Gareth Prior

Our archive photo time machine has landed in July 1972 for the latest edition of Picture in Time and we are once again in Blackpool as we take a look at Twin Car 674+684 returning to Rigby Road Depot.

Twin Car 674+684 became a permanently coupled power at the start of 1965 but the origins of the motor car are in Second Series English Electric Railcoach 274 which had been built in 1935. The Railcoach became the last of the trams to be converted into a Twin Motor with this work being completed in May 1962. Its partner – originally numbered T4 – had actually arrived in Blackpool in 1960.

In this view we see 674+684 arriving back at Rigby Road after a day in service during July 1972 with the tram carrying the Half Green/Half Cream livery with orange trolley tower. Another tram is following it back to depot whilst on the right the old Coliseum Coach Station is seen with a number of buses seen. 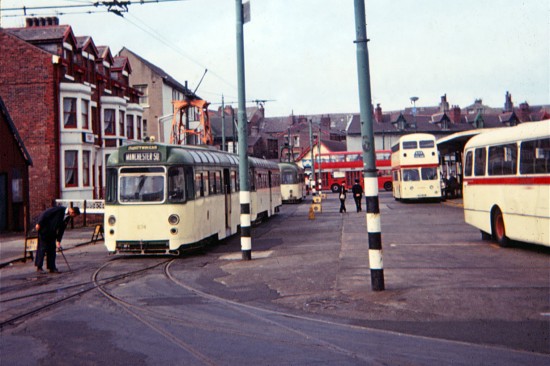