Posted on Sunday 3 July 2011 by Gareth Prior

The annual Totally Transport event took place on New South Promenade in Blackpool on Sunday 26th June with the usual mix of static road transport, stalls, entertainment and heritage trams in action. With two other significant events taking place in the preceding two days – the possible last day of a full one person operated tram service in the UK and a LTT/Trams Magazine tour using Brush 632 and Balloon 715 British Trams Online Editor Gareth Prior made a weekend of it.

This day could quite easily have been titled “Centenary Cars revenge”, the way the service had degenerated at several times during the day. The day had started with a standard five Centenary Car service with 641, 642, 643, 646 and 647 in action but early on in the day 641 failed causing chaos with a queue building up behind it. The tram was later noted stabled on the inner loop at Pleasure Beach waiting for fitter’s attention and a return to Depot, it was replaced in service by sister 648. The delays this caused were felt for most of the rest of the day with, on several occasions, trams being within a couple of minutes of each other (the timetabled service should be at a 15 minute interval). To compound this as all trams were driver only operated this caused further delays as largish queues developed at certain tramstops.

With the current timetable – running between Pleasure Beach and Little Bispham because of the tramway upgrade trackworks further north – three of the service cars to return to Depot between 1800 and 1900 and this left two advertless trams to finish the service – 642 and 643. As 2200 arrived – with the rain having set in from early evening – 642 left Little Bispham for Manchester Square whilst 643 did the same from Pleasure Beach and the curtain was drawn on one person operated trams in the UK after almost 40 years following the introduction of the OMO Cars in Blackpool. Although not yet confirmed it is widely expected that there will be no winter service provided by Blackpool Transport later this year and although there may be the odd one person operated journey during the summer if there are conductor shortages it is likely to be end of an era. 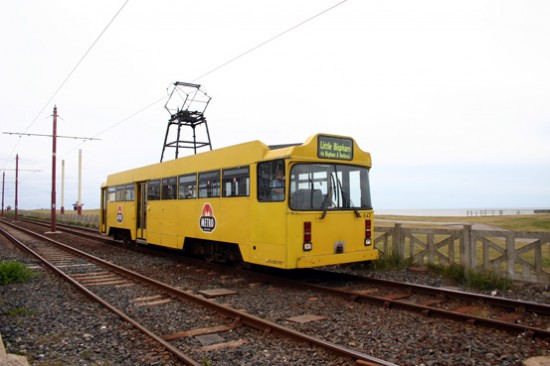 Okay we've cheated a bit with this photo and it isn't actually of the final OPO journey in the UK (it was raining and your Editor decided to just watch what was going on from his hotel room!) but it does show the tram which ran that journey - Centenary 642. The tram approaches Little Bispham earlier on 24th June 2011. (Photograph by Gareth Prior)

The day before Totally Transport tends now to a have a tram tour, normally utilising trams from the LTT collection and this year the two trams used had a distinct 1970s feel with Brush 632 and Balloon 715 now both in versions of the 1970s fleet livery (although has been previously reported the shades on 715 are not what had been hoped for being the later colours). The tour was due to start from North Pier – with no tram tours allowed to load on Hopton Road anymore – 1030, although 715 was out and about on the tramway before that running a shareholders tour. 632 was the first tram to arrive at North Pier and was stabled on the new loop line here (a different operating practice has been adopted with this loop line where trams in normal service now run straight through the centre track and the loop is used for stabling purposes, and presumably loading of Illumination Tours) and was soon followed by 715 which ran through the centre track to load at the tramstop (tour participants are now only allowed to board and alight trams at designated tramstops) with 632 following. The two trams ran in tandem throughout the day initially running to Little Bispham and then shuttling between there and Pleasure Beach except when they took a break at Bispham.

As well as the five service cars – all double deckers including both Jubilee Cars – there were an additional four specials out. With the new widened entrance Balloons yet to enter service there is a distinct lack of available three crew trams and with Balloon 723 and Twin Cars 672+682 and 675+685 out this meant this entire fleet was in action! Centenary 646 completed the line up of specials on this day. Interestingly these four trams also ran mainly between Pleasure Beach and Little Bispham throughout the day.

As the evening dawned the tour ended (due to finish around 1630), the specials and three of the service cars started to return to Depot which left the tramway to just two trams – Jubilee 762 and Balloon 717. I don’t know what is more depressing out the Blackpool Tramway in 2011, that there are only two trams out on an early summer evening or that it seems to be plenty! 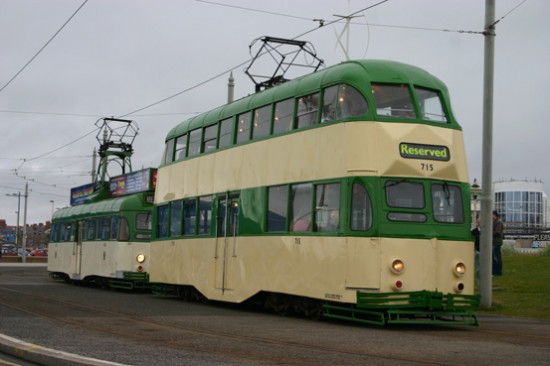 The stars of the Enthusiasts Tour which took place on this day - Balloon 715 and Brush 632 are seen on Pleasure Beach loop during their first visit to the southernmost point of the tramway on this day. (Photograph by Gareth Prior)

Onto Totally Transport day itself and following two days of indifferent weather (rain, wind and cloud) the day dawned much better and provided plenty of sunny spells – which was much better than the forecast earlier in the week had suggested. With the operating tram fleet at an all time low it was never going to be a classic tramwise with just three trams operating on the shuttle service – Standard 147, Boat 600 and Brush 632. Sadly the trams were also rather “divorced” from the main event itself with the tramway terminating at Pleasure Beach and because of fears of increasing fuel prices the organisers of the event had not booked Ocean Boulevard for vehicle displays as they had last year meaning the buses and other vehicles were not to be found until the Star Hotel.

Although it had been expected that the trams would all run a shuttle service between Pleasure Beach and North Pier, no services terminated here with 632 running all its journeys through to Cabin and 147 and 600 mainly to Bispham. 600 had run one journey through to Little Bispham but on both the north and southbound journeys it suffered a dewirement so it reverted to Pleasure Beach-Bispham.

One further special was out on the tramway on this day and that was Balloon 715 which made an appearance from late morning. A pleasant surprise to the appearance of this tram was that since the previous day it had received traditional white on black destination blinds rather than the modern dayglo versions.

Unfortunately the timetabled service did not run particularly smoothly through the day with several journeys noticed as delayed or running short. At one point in the afternoon at North Pier there was a queue of four trams heading north with 715 (a special to Little Bispham), Balloon 723 (Cabin), Jubilee 762 (Bispham) and Balloon 717 (Little Bispham).

As the day started to come towards an end the three Totally Transport specials returned to Depot, all of the returning within a few minutes of each other just before 1615. This just left one special and the five service cars out on the tramway.

Away from the tram Totally Transport had its usual mix of buses, classic cars and commercial vehicles on display from the Star Hotel down past the Solaris Centre whilst inside (and outside) the Solaris there were trade stalls, tram models in operation and entertainment. The LTT also ran their popular Seafront 12 bus service between Pleasure Beach, St Annes and Lytham utilising a number of buses from their collection. 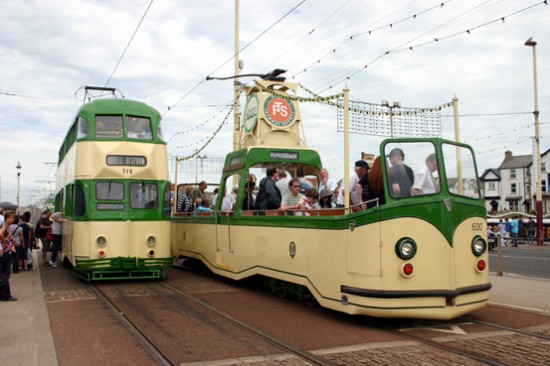 What a difference a day makes! 715 now with black and white destination blinds is seen loading at Pleasure Beach whilst operating specials with the stunning Boat 600 alongside unloading. (Photograph by Gareth Prior)