Posted on Wednesday 17 February 2016 by Gareth Prior

A tram that has been in the news in recent weeks is Blackpool Brush 634 as a result of its forthcoming return to its home tramway and it is that tram which is the latest to feature as part of Picture in Time.

The tram was built by Brush of Loughborough in 1937 entering service during the September of that year as no. 297. Ordered primarily to replace the Lytham St Annes trams which were used as illumination extras on the tramway the Brush Cars soon settled into a regular pattern of operation with renumbering coming in 1968 which led to 297 becoming 634. Single indicators followed in 1976 and a pantograph was fitted in 1986 with 634 continuing to provide sterling service until the great mothballing of 2004 which saw it sidelined along with many of its sisters. Sold into private preservation the tram then departed Blackpool on 7th November 2009 initially for Rushden in Northamptonshire and then latterly the North East Land Sea and Air Museum. Over the years a comprehensive restoration has taken place by owner Andy Ashton and earlier this year it was announced that 634 would be returning to Blackpool as part of the heritage fleet following the generous donation of the tram. It will eventually be returned to use and will once again operate along Blackpool Prom.

In this photo we see 634 arriving back at Rigby Road Depot in July 1972 following a day on specials. 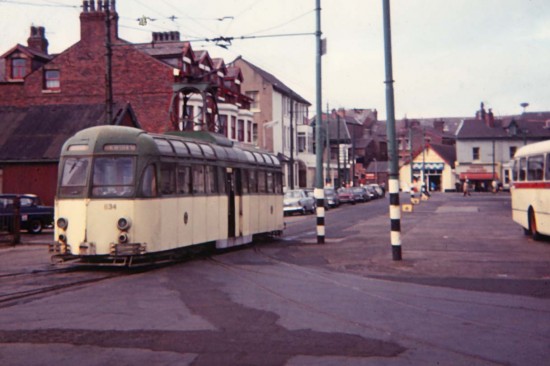