Bolton 66 gets the blues

Bolton 66 is undoubtedly one of the most distinctive trams in Blackpool, and for summer 2015 the tram has a new look thanks to some recently applied adverts for a brand new sponsor. Having last operated sans adverts as recently as Saturday 20th June, 66 was out again with blue advert banners applied just ten days later.

The Bolton 66 Trust, who own 66 (which is actually on loan to Blackpool despite having been there since 1981!) take a tour of the Blackpool tramway aboard their tram every year and their latest trip took place on the evening of Tuesday 30th June. In glorious early evening sunshine, a full load of happy passengers journeyed to Fleetwood and back aboard the 1901-built veteran. This was also its first outing since the application of new adverts for Stephensons, a catering business who have apparently been trading even longer than 66 has existed for, making them an appropriate sponsor for the car. Of course, the Bolton tram has carried adverts before during its time at Blackpool, most recently for Acdo – a contract which lasted from 1994 right until 2013, and since this time the tram had been devoid of any advertising allowing its ornate between-deck lining out to be better appreciated. However, this has now changed again with the addition of the new adverts. Unlike the previous design, a bold blue background has been chosen which certainly stands out against the maroon and cream livery of the tram. Whilst the style of lettering used on the top deck sides is quite attractive, further posters applied to the side of the dash panels have somewhat spoilt its appearance – particularly due to the inclusion of needlessly large Facebook and Twitter logos, emphasising the company’s social media presence.

Hopefully the income the Bolton 66 Trust have gained from this new advertising contract will be used at some point in the future to benefit their prized asset, justifying this compromise to its authentic appearance. However, it is a pity that a bit more thought couldn’t have gone into the design of the adverts, although obviously the fact that 66 continues to be enjoyed in Blackpool is far more important. 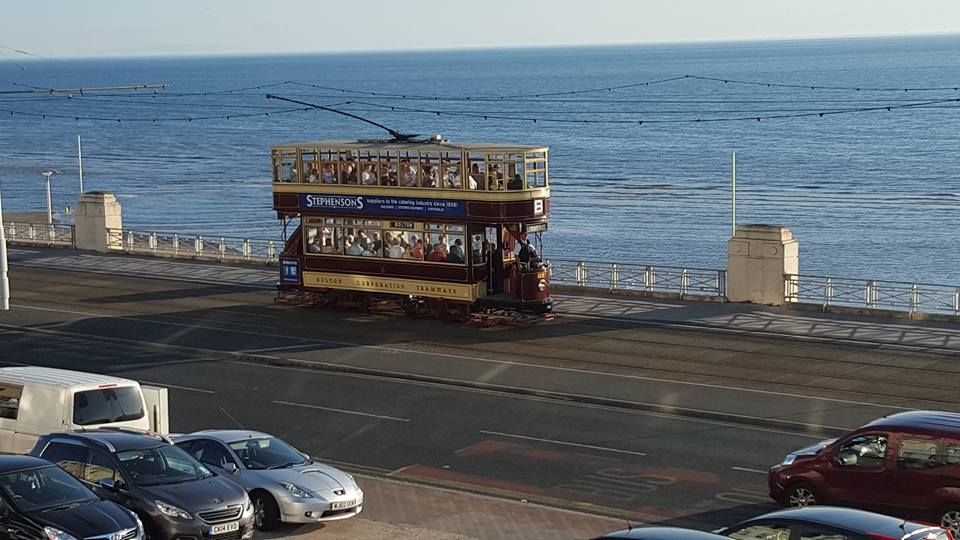 A beautiful summer evening provides the perfect showcase for Bolton 66 and its new adverts, seen here on North Promenade as the car heads towards Fleetwood. (Photo courtesy of Lordy Gordy on 'Blackpool's Trams and Buses' Facebook page)

1 Response to Bolton 66 gets the blues