Posted on Wednesday 28 January 2015 by Gareth Prior

It seems you can’t go too long on Manchester Metrolink without another incident involving a car with the latest such incident occurring on Tuesday 27th January. This time a cab managed to drive into the path of a double unit (led by 3022) on Mosley Street at the junction with Nicholas Street – by no means the first time a car has come into contract with a tram at this location.

The collision happened at 0955 and all tram services through the area were immediately suspended with the emergency services called. According to reports the cab driver said that he had not seen the tram coming and when he attempted to break his car just skidded into the path of the Metrolink vehicle. Fortunately there were no injuries reported with the cab driver being interviewing by Police at the scene before being allowed to go home.

The area was cleared by 1100 after which time Metrolink services were gradually reformed, although as is always the case with incidents such as this residual delays were suffered by passengers for several hours.

3022 was returned to depot where it will require repairs before being released back into traffic. 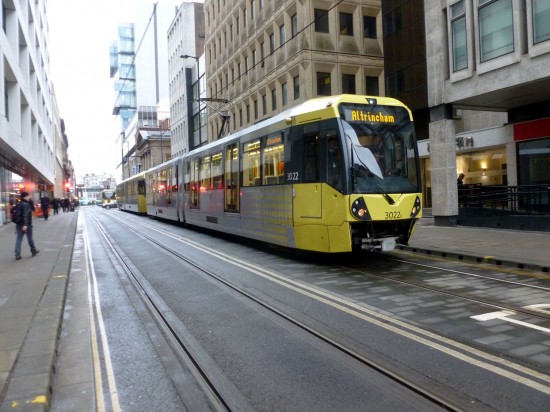 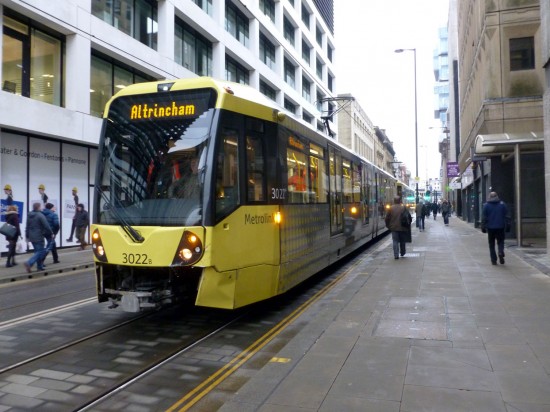 Two images showing the aftermath of the incident with the damaged front skirt of 3022 removed ahead of the vehicles being returned to depot. (Both Photos: Ralph Oakes-Garnett)

10 Responses to Car collides with tram in Manchester City Centre