Two popular preserved Blackpool tramcars have started 2015 on a negative note, after many years of reliable service. Beamish Museum’s Sunderland 101 – best known by many of us as Blackpool Balloon 703 – has recently been withdrawn from use, whilst at Crich Tramway Village, the chances of a quick return to service for Blackpool & Fleetwood ‘Rack’ 2 appear to have diminished.

Following over three years of intensive use on the Beamish Museum tramway, Balloon car 101/703 is now out of the operational fleet. During recent routine checks, a problem with one of its tyres was found which was considered sufficiently severe to enforce its immediate withdrawal from traffic. The tyre ring on one wheelset has fractured, something which as far as the staff at Beamish know has not been encountered before. Whilst the option exists to lift the tram and carry out the necessary work to get it back into service, this would require a considerable amount of effort which has not been incorporated in the current plan for the museum’s transport collection, and bearing in mind that the car is known to be in a generally poor condition, other issues may well lead to a return to service being short-lived anyway. It could be that 101 has operated for the last time in its current condition, as the tram is expected to receive a major overhaul at some point in the future which will probably see it rebuilt to more closely resemble a genuine Sunderland tram, including the restoration of its original twin destination indicators. However, at present this work is not a high priority with the restoration of Gateshead 52 amongst the other big projects which are ahead of it in the lengthy queue for workshop time and space! It has also been confirmed that the loan of Blackpool 280 will not be extended, and this tram is therefore expected to move to Heaton Park this year, which could leave Beamish seriously short of enclosed trams for the summer season ahead. Help is on the horizon though, as Sheffield 264‘s rebuild is progressing well, and it is also hoped to undertake some remedial work on Grimsby & Immingham 26 during 2015 to allow this tram to see some further use in the British Rail green livery, before a body overhaul and repaint as Gateshead 10 can be carried out, hopefully next year.

More bad news comes from Crich Tramway Village in regard of Blackpool & Fleetwood 2, which was withdrawn late last year after a brief revival for the ‘Electric 50’ celebrations. At the time it was stated that the tram had worn tyres and also requires some other workshop attention, but no indication was given as to when the required work would be undertaken. It has now been stated that the car will be moved to the Exhibition Hall for the 2015 season and that new interpretive panels are being produced to match those placed alongside the other trams which are long-term residents in the building. This does not bode particularly well for car 2 as the efforts being made to incorporate it within the exhibition would certainly imply that it will be in for a long stay there. If this is the case, then it will be very disappointing; not only is ‘Rack’ 2  one of the most popular trams in the fleet, but it was also treated to an extensive rebuild in 1998 and so presumably any attention it now needs should be fairly minor. Perhaps, if the museum cannot or does not wish to commit the resources needed to restore it to the running fleet for the foreseeable future, consideration could be given to offering it to the Blackpool Heritage Trust on a long-term loan arrangement, where it could potentially be used to promote the Crich Tramway Village to a larger audience? Hopefully 2‘s fortunes will improve sooner rather than later, but right now,  it looks increasingly likely that it will not be running again for quite some time. 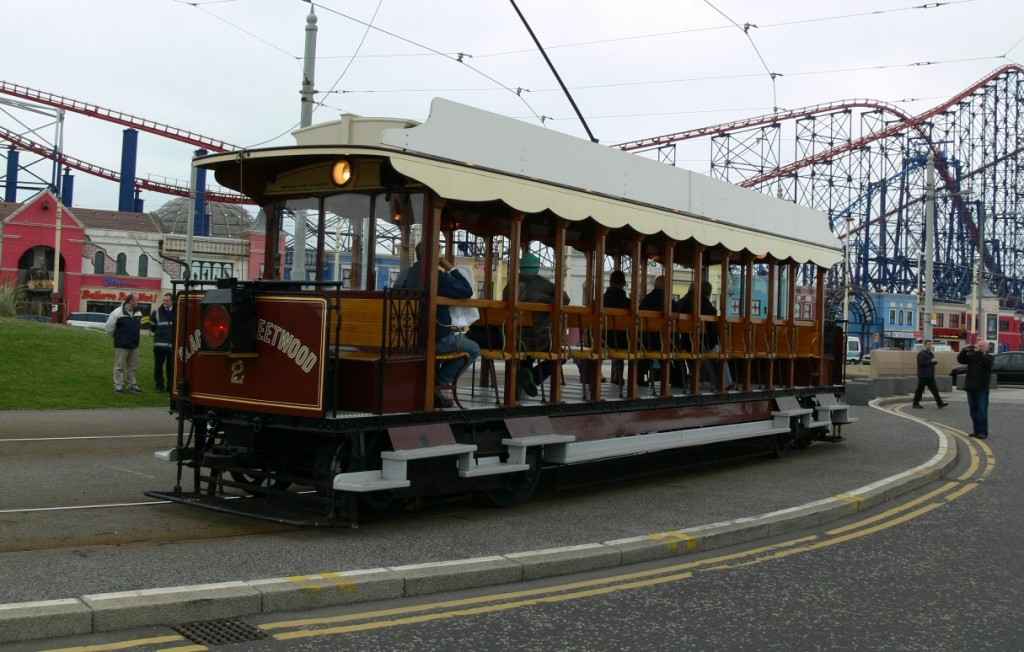 A flashback to 2010, and happier times for 'Rack' 2 which enjoyed a brief spell of operation at Blackpool. Here the tram is seen on the Pleasure Beach outer loop whilst partaking in an enthusiast tour. (Photo by Andrew Waddington)