What better tram to feature as our first Picture in Time of 2015 than the tram which won the “Tramcar of the Year” – Blackpool Pantograph 167. Over the past 12 months this tram has featured countless times on the pages of British Trams Online but never have we seen in the same state as we show it today – during its restoration at Bolton in the mid 1980s.

The tram had been transported to Crich way back in 1962 but had to wait its turn for restoration and it was to be 21 years before that time would come. In 1983 167 – which retained the all over green livery it had received during its later years of works service in Blackpool – was transferred to the Smithills workshop in Bolton where a start was made on a full restoration funded by a Manpower Services Commission grant. The trams restoration was completed over the next two years and 167 was able to make the trip back home to Blackpool (the first of four trips back so far) to play a starring role in the Centenary celebrations.

Our “Picture in Time” shows 167 at Bolton during its restoration whilst still carrying the all over green livery. 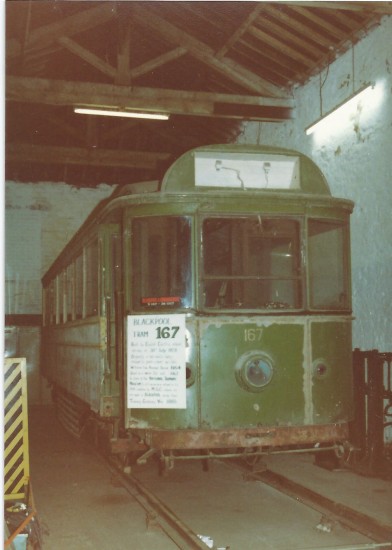