Posted on Friday 8 August 2014 by Gareth Prior

1022 has become the third Manchester Metrolink T68 to depart Trafford Depot to become part of the UK Tram test fleet with 1016 also looking certain to leave Manchester in the near future of the same purpose. 1022 left Manchester early on Friday 8th August heading for Long Marston where 1024 and 1026 are already situated alongside Midland Metro T69 014.

1022 had spent the previous few days in the workshops at Trafford where preparation works were undertaken ahead of its transport down to Warwickshire. With the LRV loaded onto the Allely’s low loader it left Trafford at 0530 on the morning of Friday 8th August and on its way to the M60 travelled alongside the Metrolink tracks on the Ashton-under-Lyne line at Audenshaw – who says T68s have never been on the East Manchester Line! 1016 is likely to follow 1022 into the workshops for its own preparation works before it too follows the same route down to Long Marston for initial storage and then use as part of the UK Tram test fleet.

We now know that at least six T68s will initially survive the scrapings taking place at the moment with 1016, 1022, 1024 and 1026 joining the test fleet, 1007 being preserved by the Manchester Transport Museum Society and 1003 being acquired by the Greater Manchester Fire Service for training purposes.

Meanwhile 1010 is still at Trafford Depot but the majority of the component recovery works have now been completed and this too is expected to leave Manchester in the near future. It will be 11th T68/T68A to head for scrapping when it does eventually leave.

Meanwhile M5000 3085 has now entered service and is part of the non-ATS/VRS fitted fleet so will mainly be seen on the Eccles-Ashton-under-Lyne and MediaCityUK-Piccadilly services for now. Of note is that the LRV has had advertising vinyls attached to the windows for Here’s One We Made Earlier, a new exhibition at the Lowry which is celebrating the history of BBC Children’s broadcasting. 3086 remains at Queens Road Depot. 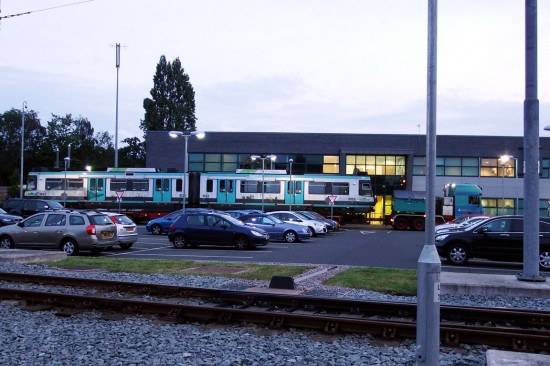 1022 all ready to depart, loaded onto the back of the lorry at Trafford Depot. 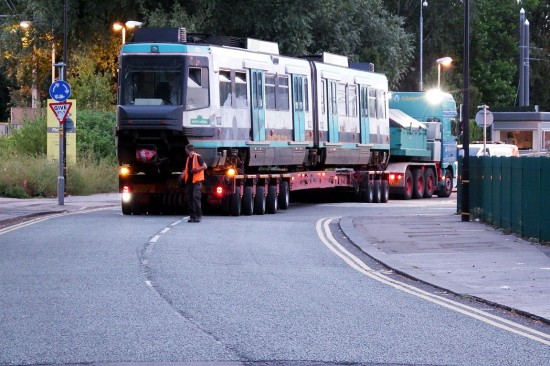 1022 backs out of Trafford Depot at the start of its journey south. 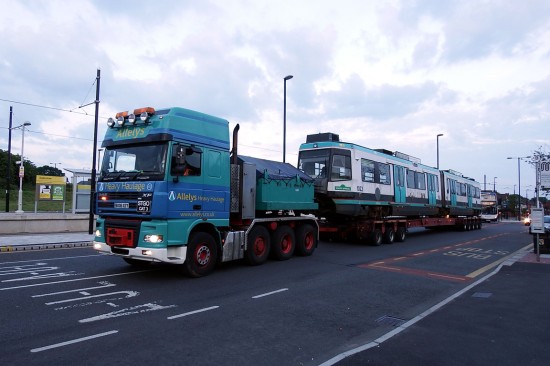 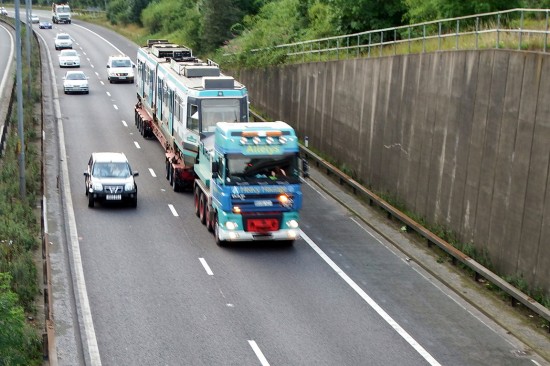 And 1022 leaves Manchester for the last time. (All Photos: Steve Kemp)