Queen’s Road welcomes back a T68!

Just eight weeks after losing its last T68 (and three weeks since the last T68As departed) Queen’s Road Depot has now welcomed back a T68 following the transfer of 1003 overnight on Friday 18th July. Despite some claiming that no T68s would be able to operate across the city centre following the changes at Victoria 1003 ran under its own power although due to a traction fault one set of traction motors had been isolated and it operated on limited power.

1003 has been returned to Queen’s Road in preparation for its movement off site at a still to be determined date. This LRV has been acquired by the Greater Manchester Fire and Rescue Service and will used for training purposes. It will eventually be moved to a new training centre but as this has yet to be built it is likely that 1003 will initially be moved to the East Lancashire Railway for further storage. When it does make the final move to the training centre it will be joined by some items of rolling stock from the East Lancashire Railway.

It is highly likely that the move of 1003 will be the last powered T68 run across Manchester City Centre with any further movements expected to be consigned to movement around the depot.

1003 was delivered to Manchester on 5th November 1991 entering service on 6th April 1992 and survived in service until 12th November 2013. It was also the only T68 to ever operate in service in the new Yellow and Silver livery with the centre section used for advertising purposes. 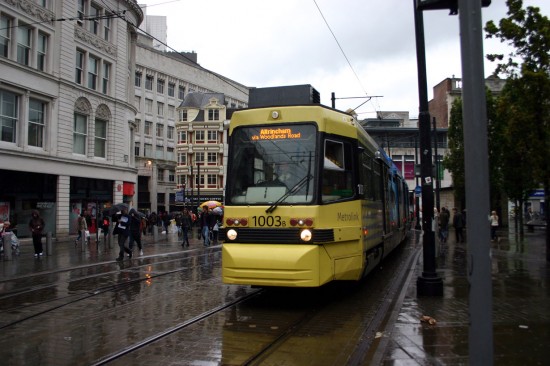 1003 runs through Manchester City Centre on 20th September 2012. It has now become the last T68 to travel through the city centre. (Photo: Gareth Prior)

13 Responses to Queen’s Road welcomes back a T68!