Forget the song about how football is coming home – far more exciting news concerns the return home of another tram from the Lancastrian Transport Trust’s collection, with another expected to join it shortly. The tram which has already moved back to Blackpool’s Rigby Road depot is Balloon 704 which returned home on Monday 23rd June with assistance from Scotts’ Heavy Haulage.

Back in September 2012, 704 was one of six trams owned by the LTT to be moved from Rigby Road to outside storage at nearby Marton, after its owners failed to secure more suitable accommodation for its assets. Since then, the organisation has relinquished control of its entire tram collection in order to focus on its vintage bus fleet, with most of the trams being returned to the care of Blackpool Transport to join the expanded heritage fleet. However, with so many Balloon cars already in the fleet, it was reluctantly decided not to take 704 and it was subsequently left behind when the other LTT cars were rescued and returned home, leaving the tram facing a very uncertain future, not for the first time.

However, salvation has come for this tram in the form of an anonymous individual who has bought the car and arranged for it to be transported back to Rigby Road, where it will be stored undercover. Ultimately it is hoped to restore it as an authentic open top streamliner and operate it in Blackpool, but for now the priority is that the tram is safe from the perils of open storage. Two years at the mercy of the great outdoors have unsurprisingly taken their toll on 704 which already looked less than pristine when it previously left, having been partially stripped and lost various parts to assist with the restoration of sister car 717, but the car is thought to be structurally sound and certainly the potential to transform it into something really special is clear to see. With the Manchester Transport Museum Society and the North Eastern Electrical Traction Trust holding aspirations to carry out similar restoration work on preserved Balloon car 708, it remains to be seen which of the pair will be completed first, but the prospect of a second open top Balloon car running in Blackpool to complement ‘Princess Alice’ 706 is a mouthwatering one for sure.

After making the short journey across Blackpool, 704 was unloaded fairly easily with assistance from a unimog and was then shunted into the depot, regaining covered accommodation for the first time in nearly two years. However, another tram formerly owned by the LTT is set to join it soon with the unique illuminated Rocket 732 expected to return home in the very near future. This move really cannot come soon enough as the tram has suffered badly in recent months, with several body panels and part of its tail fin having become detached, but soon it will be removed from the Gynn roundabout and will join 704 in finding eternal sanctuary back where it belongs at Rigby Road. 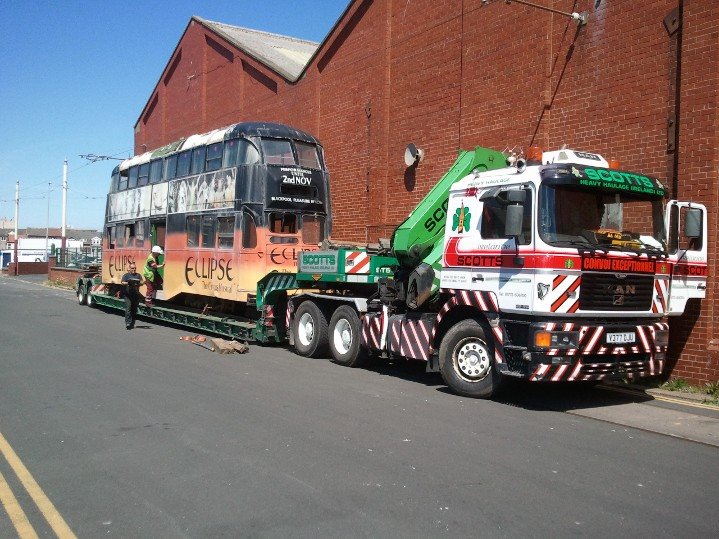 The welcome return of car 704 in glorious weather, as preparations are made for the tram to be off-loaded on Blundell Street shortly after arriving at its new/old home on 23rd June. (Photo by Chris Callan)