Edinburgh Trams Countdown: A History of the project

At 0500 on Saturday 31st May it will be the start of a new era for public transport in the Scottish capital as the first public passenger service leaves Gyle Centre for the city centre. It may have seemed like it has been a long road (and let’s be honest it has been!) but finally after the best part of six years of construction trams will be running in Edinburgh once again and hopefully the public will see just what all the fuss has been about.

It has been nearly 58 years since trams last ran in Edinburgh when the final routes of the Corporation Tramways were closed on 16th November 1956. Just six years later in 1962 trams had disappeared from the streets of Scotland completely when Glasgow’s system went the same way and at the stage it looked as if that was the end of the story for Scotland and tramways, but as the 20th Century drew to a close the tide started to turn for trams in the UK. With the success of systems in Manchester, Sheffield, Birmingham and Croydon leaders in Edinburgh started to turn their attention to improving public transport in their city.

The first ideas of a system were expressed in the 1990s before the first concrete proposal was made in 1999. This would have seen a line built along Princes Street and Leith Walk to Newhaven and was partly proposed by the New Edinburgh Tram Company in conjunction with the City Council. Although nothing was to come of this initial proposal it did sow the seeds for the future and in 2001 the Edinburgh Trams project we now know of was born.

This should have seen a three line network with a circular route around the northern suburbs and two routes from the city centre, one to Newbridge and the other to Newcraigall. Parliamentary Bills to approve the plans went to the Scottish Parliament in 2006 and they approved Lines 1 and 2 but full funding to include Line 3 was not possible and after rejection by the Edinburgh public of congestion charging the line to Newcraigall was removed from the network.

It was planned to build the remaining two lines in four phases with a line between Newhaven and Edinburgh Airport due to be constructed first as Phase 1a. This would have been an 11.5 mile line and would then have been followed by Phase 1b (Haymarket to Granton Square), Phase 2 (Granton Square-Newhaven, thus completing the loop line) and Phase 3 (extension of the Airport line to Newbridge).

But then in 2007 the first signs of trouble started to come out with the Scottish National Party’s manifesto for the approaching Scottish elections. The SNP made it plain that if they gained power at the election they would withdraw funding for Edinburgh Trams (alongside the Edinburgh Airport Rail Link) to save money. The SNP did go on to win the election but were only able to form a minority government and when it came to a vote at Holyrood the plan to abandon the project was defeated. This hurdle may have been overcome but it was not to be the last!

At the end of 2007 it seemed that things were starting to progress well with the Council approving the Final Business Case in October and then in December contracts were signed with CAF for the trams and Bilfinger Berger-Siemens for design and construction work of the infrastructure. After the final contracts were signed construction work was able to start in June 2008 but by this stage costs were starting to increase and more trouble was on the horizon.

When the scheme was mooted in 2003 it was expected that the total cost of the whole planned network would be £498 million but in the intervening 11 years it has continued to rise and rise. At the time of the start of construction in 2008 it had risen to £521 million and this led the City of Edinburgh Council in April 2009 to decide to axe the section from Haymarket to Granton Square (Phase 1b) and also the link between Granton and Newhaven (Phase 2).

This decision and the ever increasing costs came at a time when the atmosphere between Transport Initiatives Edinburgh (tie), the arms length company set-up by the Council, to progress the project and Bilfinger Berger rapidly deteriorating. As the dispute between the two sides took hold (Bilfinger Berger were claiming extra funding to complete the work but rather predictably tie didn’t want to give it to them!) delays were experienced to the project with work being suspended at times. Eventually tie started legal proceeding against Bilfinger Berger and these were presented to an independent arbiter who in the end did award Bilfinger with almost an extra £80 million. In the aftermath of this dispute tie was disbanded by the Council.

D-day was now approaching for a final decision to decide whether to carry on with the project or to cut their losses. It was decided on 30th June 2011 that the project would continue but with a much shorter line than planned: Edinburgh Airport to St Andrew Square but with a much higher cost than originally: £770 million. But this was not the end of the debate as just two months later the decision was changed and it was decided to end the line at Haymarket, thus missing out on Edinburgh City Centre completely. But no this wasn’t to be the end of it as just one week later the terminus was back at St Andrew Square and then at the end of November it was decided to build a terminus at York Place. And that is now the extent of the system which will open to the public on Saturday 31st May.

Once the disputes well out the way and the Council made these decisions to press on things have gone fairly smoothly and have been going according to the revised business case and schedule (which it has to be admitted will see trams start running three years later than originally planned).

As progress continued on the construction of the line it was possible for trams to start testing with the first runs between Gogar Depot taking place in August 2013, extended to Edinburgh Park in October and then the full length in December 2013. Over time the hours of testing have been extended until from Monday 7th April 2014 seven days a week testing commenced. Which brings us nicely up-to-date as we wait for public services to begin which, you may well have worked out by now!, will be at 0500 on Saturday 31st May. 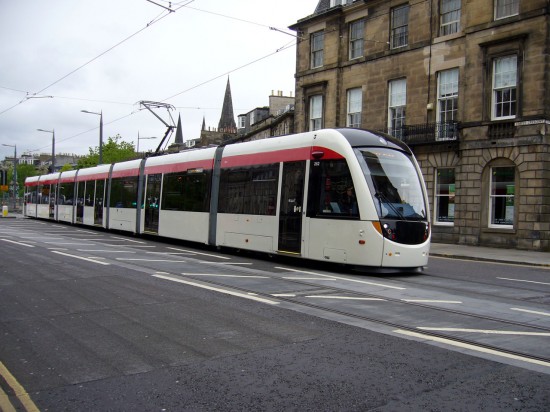 Although the majority of the Edinburgh Trams fleet have received the latest livery style the "as delivered" style is still carried on at least one vehicle - 262. This tram has been used on testing several times over the past few days and is seen in this photo having just left the Princes Street West tram stop and is passing through Coates Crescent and about to enter Shandwick Place heading for Princes Street and thence the York Place terminus. (Photo: John Hampton)

2 Responses to Edinburgh Trams Countdown: A History of the project