Heaton Park and Blackpool Transport team up for Easter event

When it was first announced that Blackpool’s heritage tram service would not be operating on Easter Monday this year, there was considerable disappointment expressed, particularly from those people who had planned to stay over in Blackpool for the long weekend to enjoy the heritage tram action. However, the Heaton Park Tramway have stepped in to offer a slightly different attraction for the Bank Holiday Monday, with the support of Blackpool Transport.

As announced previously, the heritage trams will be out in force on the Blackpool tramway for three consecutive days over the long Easter weekend, 18th to 20th April inclusive. However, for the Bank Holiday Monday, 21st April, visitors are being encouraged to visit Manchester for a day of riding on some of the preserved Blackpool trams now resident at Heaton Park. A vintage bus is booked to depart from Corporation Street Blackpool at 10:30am and transport visitors to Heaton Park, with a return journey late in the afternoon. For a bargain fare of just £10, passengers can ride on the connecting bus and also enjoy unlimited travel on the trams at the park throughout the day. Monies raised will be used to offset the cost of using the bus for the day – scheduled to be a preserved Blackpool PD3 – with the remainder being donated to the Heaton Park Tramway.

A mini-event is planned for this day with two Blackpool trams, Replica Vanguard 619 and Brush Railcoach 623, due to be in operation. A short ceremony will take place during which 619‘s newly restored fleet numbers will be unveiled by Blackpool’s own heritage tram supremo Bryan Lindop, before the tram re-enters service with a more authentic identity. In addition, visitors will be allowed to look around the new Lakeside Depot and see the various trams inside, including recent arrival Manchester 173, whilst ‘Tram Driving Experience’ trips will also be offered on Blackpool Railgrinder 752 for an additional charge on a first come first served basis.

Anyone wishing to reserve a place on the vintage bus operating between Blackpool and Manchester is encouraged to contact eric.berry943@btinternet.com to do so, as seating capacity is obviously limited. The various organisations and individuals who have been involved in this special arrangement are to be applauded, and it is hoped that a good number of people will take advantage of this excellent deal and make the best of what could otherwise have been a rather boring Bank Holiday for tram enthusiasts! 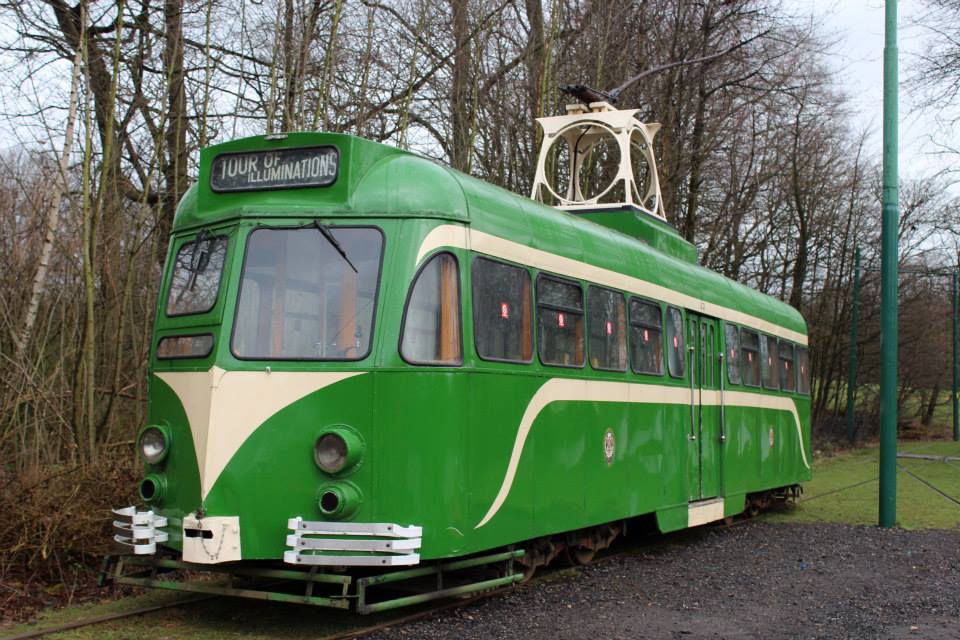 A stunning shot of Blackpool Brush car 623 at the Heaton Park Tramway's Lakeside terminus. This should be one of three Blackpool trams running on the Easter Monday Blackpool event at this tramway. (Photo by Martin Strickland)