It seems like barely a week goes by without something momentous happening at Manchester’s Heaton Park, and the latest milestone was achieved on Sunday 9th March when the first two tracks to be laid within the new Lakeside Depot were fully occupied by trams. This included Blackpool Vanguard 619, which is now back in full-time undercover accomodation for the first time since the end of 2011.

Although Track 3 (the first to be installed) has been home to Manchester 173, Leeds 6 and Blackpool 623 since last December it is only in the past week that Track 2 has been sufficiently complete to be used. On Tuesday 4th March, Blackpool 752 became the first tram to utilise this section of track, and following some finishing touches to the rails laid at the very back of the new shed, the entire road was ready to be brought into use just five days later. As a result, car 619 was driven from the opposite end of the tramway, where it is normally stabled, up to Lakeside. After some impromptu photo opportunities, which saw 6 and 623 briefly emerge into the winter sunshine, 619 took its position at the rear of the depot, with 752 being parked in front. Sandwiched between the two trams is a small trolley used by the track gang which is affectionately known as ‘Tilly the Truck’, which as we far as we know has not appeared in any of the Thomas the Tank Engine stories! This means that the two completed depot roads are already fully occupied, but more importantly, all of the vehicles on site are now housed undercover once again. This is a massive leap forward for the Manchester Transport Museum Society, and the sight of the Lakeside Depot becoming increasingly full of trams is a wonderful one.

Despite a few setbacks, this really summarises how far the MTMS have progressed in the last couple of years and the fleet of trams they now have at the park is stronger than ever before. However, the excitement looks set to continue with two more new arrivals expected when Blackpool cars Balloon 702 and Railcoach 680 finally move to the park and take up residence in the new depot, once the third and final track is laid. For now though, the priority is likely to be preparing Vanguard 619 for service for the first time since 2011, now that its time stored outside has come to an end. Apart from a brief visit to Lakeside Depot at the end of last year, 619 has endured more than two years exposed to the harsh Manchester climate, but it has stood up to this challenge remarkably well. The car is now expected to be commissioned – which will include the removal of its protective boarding and the fitting of a new invertor – in time to help start the tramway’s 2013 season in fine style on 30th March. This should also be the last opportunity to see it operating with the fleet number 7, as it will shortly regain its true identity as 619 with new vinyls to be applied to its dash panels and roof advert boards. With Stockport 5 currently out of action, 2014 could be a busy year for this tram which is likely to be the first choice tram on fine days during the early part of the season, with Blackpool Brush Railcoach 623 also available for service. 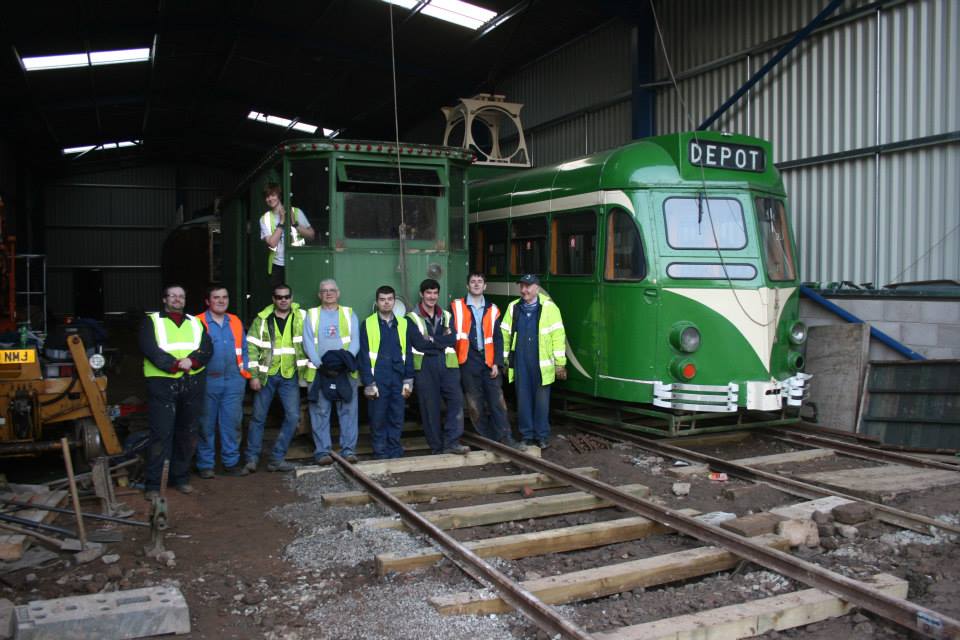 Some of the many hard-working volunteers responsible for the work to make Lakeside Depot available for its intended role pose proudly in front of Blackpool trams 623 and 752 on 9th March, having successfully moved both 752 and 619 onto road 2 that day. (Photo by Joe Savage)