During the 2013 season, every operational member of the Blackpool heritage tram fleet had visited the tramway’s northern terminus at Fleetwood, with just one exception. ‘HMS Blackpool’, the illuminated Frigate 736 stuck rigidly to the Pleasure Beach to Little Bispham section throughout the main season, but then made history on Saturday 23rd November with a surprise visit to the port.

The evening of November 23rd saw the Christmas lights switched on in Fleetwood, with Kai Hodgkinson – a local youngster with cerebral palsy whose family are trying to raise money for him to have surgery so that he can walk again – given the honour of flicking the switch. The other star of the show was the iconic illuminated tram, paying its very first visit to Fleetwood since 2009. Of course, the tramway looked very different back then, whilst 736 itself has since been changed somewhat with a revised appearance created by re-positioning many of its external light bulbs recently. The tram’s bright appearance was certainly a very welcome addition to the occasion and was no doubt appreciated by local residents, whether or not they appreciated the significance of its outing.

The Frigate led a lantern parade and was followed along Lord Street by the Fleetwood Sea Cadet Old Boys Band, with a sleigh and many local children also joining in with this unusual procession through the town streets. Some VIPs, including the Mayor and Mayoress of the town, and MP Eric Olenshaw, were allowed to ride on the tram for this rare winter journey. After the event was over 736 was dispatched back to Rigby Road, where it is expected to remain until well into 2014. With access to this depot expected to be blocked by roadworks for part of the winter period, appearances by heritage trams this winter will be few and far between, so it was particularly good to see ‘HMS Blackpool’ providing some extra festive cheer in Fleetwood. 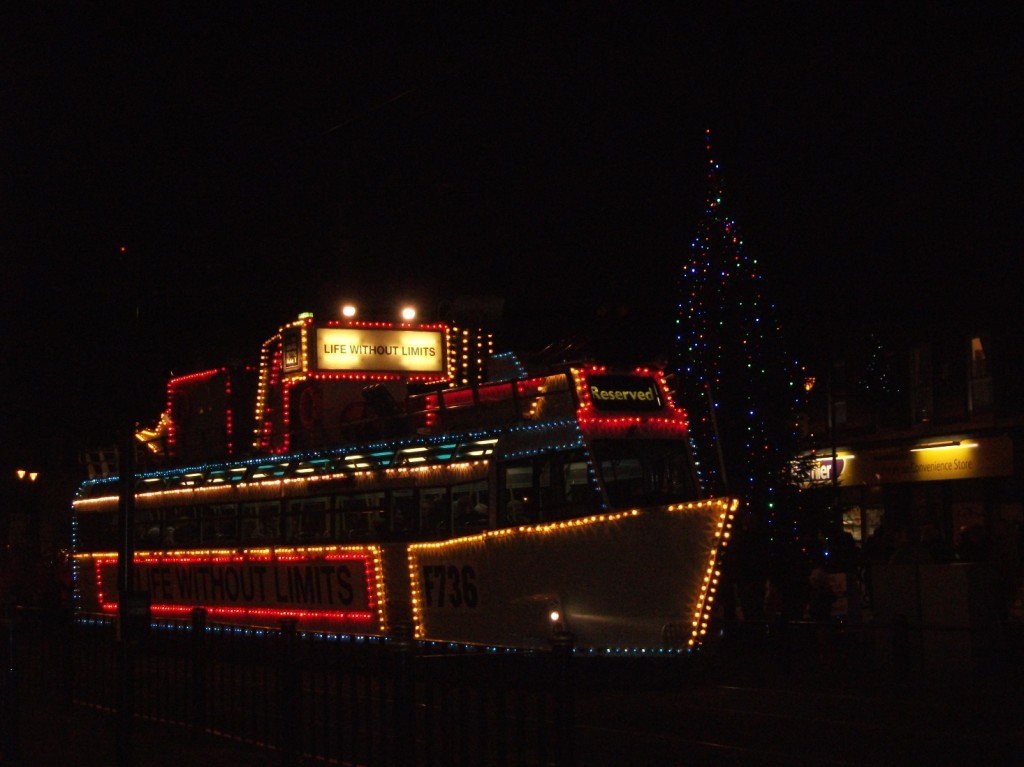 History in the making for HMS Blackpool 736, seen with the unusual backdrop of a Christmas tree at Fisherman's Walk, Fleetwood, on a very cold November 23rd. (Photo by Paul Galley)

5 Responses to Night boat to Fleetwood