The Manchester Transport Museum Society have now revealed exciting plans for some of the vehicles within the fleet at the Heaton Park Tramway. Not content with the expected increase in the number of trams on site when the new Lakeside Depot is completed later this year, the MTMS have decided to exhibit some of its trams in different liveries, which it is felt will better suit their historic value.

The first such project will be the completion of Leeds 6, which has been receiving workshop attention since returning home from Beamish Museum in April. Having operated in the drab grey Leeds works car livery since its last overhaul in 2008, this car is to be returned to its previous guise as Hull 96, and will be repainted in maroon and white. This will return it to a similar condition to that in which it ran following its initial entry into service at Heaton Park. An MTMS member has generously offered to assist with the funding of this work, which will include the addition of Hull Corporation crests and the ornate fleet number ‘96‘ on both dash panels. Along with some essential remedial work on Manchester 765, this will be the main workshop project over the winter months.

Next spring, it is planned to carry out some paintwork attention to a tram which hasn’t even arrived at Manchester yet: Blackpool 680. It may be recalled that this Ex-Towing Railcoach was repainted back into an approximation of its 1960s cream livery by Blackpool Transport back in 2010, and remains stored at their Rigby Road premises. Fairly soon after 680 finally moves to Heaton Park, the car is expected to receive some livery alterations to portray its 1990s appearance; a highly appropriate decision, as the car was last treated to a heavy overhaul in 1992, and should therefore look exactly as it did when first outshopped in its current condition. The tram will therefore receive black window surrounds as well as green roof, skirt and platform doors. It is also planned to remove the advert panels attached to the side of the car’s trolley tower, and this will also be repainted green. Hopefully the opportunity will be taken to launch 680 in all-over cream before it receives these additions, to add further novelty value and encourage its many fans to visit the tramway again when its livery is modified!

Other work planned includes some attention to Manchester 765 to ensure that this important tram remains serviceable during 2014, its 100th anniversary year. After this the car is expected to be withdrawn for a more thorough overhaul. Some remedial work is also planned for Blackpool works car 752, whilst Blackpool Balloon 702 is to receive a heavy clean when it arrives from Bury. Although there are no plans to prepare this car for service in the immediate future, this can certainly be forgiven with such a hectic work schedule planned for the months ahead, and it will still be fantastic to see 702 safely housed undercover at the park, something which should hopefully occur before the end of 2013.

With so many exciting projects in the pipeline, Heaton Park looks like an essential destination for all fans of classic British trams in 2014, and hopefully this ever-improving tramway will continue to surprise and delight enthusiasts long after these projects happen. 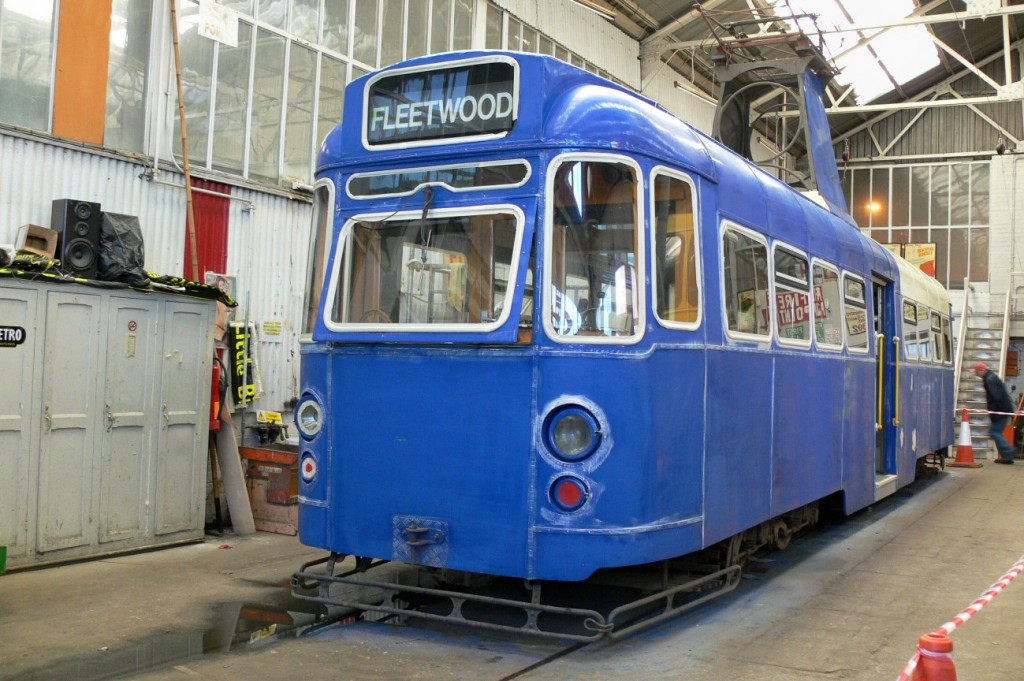 Blackpool 680 seen in the early stages of being repainted cream, during the 2010 Blackpool depot open day. This livery looks like being a short-lived one as it will be replaced by 1990s green and cream soon after 680 reaches its new home. (Photo by Andrew Waddington)