Thursday 19th September saw the dreaded day arrive, when Blackpool Boat car 233/605 finally left Beamish Museum to begin its long journey to San Francisco, after being sold by its previous owners, the Lancastrian Transport Trust. All attempts to block the move – which included formal complaints about the sale being made to the national Charities Commission – have sadly been in vain, and the tram is now well on the way towards becoming history as far as the UK is concerned.

More than two weeks after it was prepared for departure, 233 was loaded onto a lorry provided by Scott’s Heavy Haulage (who previously delivered the tram to Beamish some 18 months earlier) on the morning of September 19th. Despite rumours that its collection had been delayed, this was in fact the date which had been arranged with Beamish Museum. The sombre mood of the occasion was complimented by heavy rain which blighted the loading process. The trolley tower – which had been removed from the car on Monday 2nd September, mere hours after its last passenger journeys in Britain – was placed inside one saloon and fastened down for safe keeping during 233‘s long journey by road and sea to America, via Southampton Docks. However, unlike the previous Boat car to be exported (car 606, in 2000) the tram has retained its modern windscreens which were fitted in 1990. Needless to say, it looked considerably better when it left Beamish than when it arrived there in March 2012, having been superbly repainted with British Trams Online funding, and of course it has also received other repairs during its time in the North East.

Unfortunately, just to add insult to injury, it was noted that 233 has sustained some minor accident damage at one end. Although not known for sure, recent photos of the car inside the depot at Beamish did not show any damage, suggesting that this probably occurred during the loading process. A fender at one end has been distorted, which appears to have caused some minor panel damage as well. Although this should be easy enough to correct, it just adds further bad feeling to what was already a very dark day for the British tramway preservation movement. It seems that all hope of 233 staying in its home country is now gone, but hopefully the tram will be greatly enjoyed in its new home. 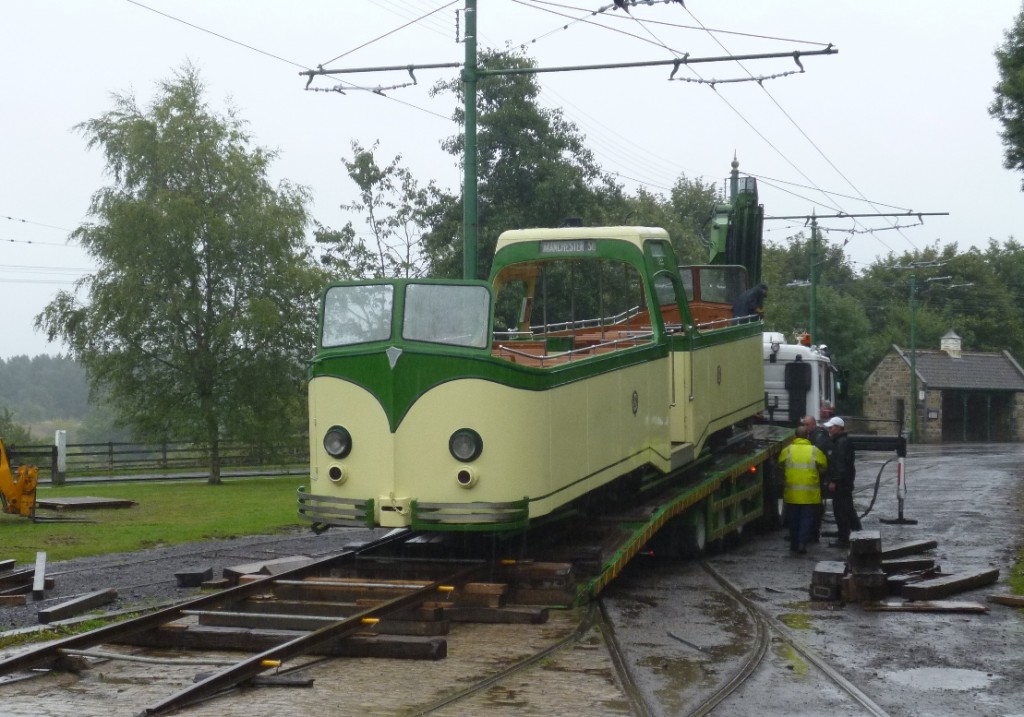 Up she goes! Blackpool 233 is gently winched onto the Scott's low loader before bidding farewell to the North East - and soon, the UK - for the final time. (Photo courtesy of the Beamish Transport & Industry Blog)