With the current ongoing Coronavirus crisis the opening of the latest Manchester Metrolink extension – and likely to be the last for some time as there are now no construction works continuing – opened to the public on Sunday 22nd March. A far more low-key opening than any other recent line opening for obvious reasons passenger loadings were very low on the first day with people heeding the social distancing warnings and only taking essential journeys on public transport.

The Trafford Park line runs for 5.5km (approximately 3.4 miles) and leaves the current Eccles line shortly after the stop at Pomona. It then travels to the intu Trafford Centre with new stops also provided at Wharfside, Imperial War Museum North, Village, Parkway and Barton Dock Rock. The line will be ideal for getting not only to the Trafford Centre but also the various businesses in Trafford Park and tourist attractions such as the Imperial War Museum and also for football fans going to Manchester United’s Old Trafford ground. That will be ideal once everything gets back to normal at some point in the future.

Eventually services will run every 12 minutes between the intu Trafford Centre and Crumpsall on the Bury line but with delays to the delivery schedule of the 27 new trams to start with services will only be able to run as far as Cornbrook. Five trams will be needed on a daily basis to operate this shortened service.

There had been debate in the lead up to the planned opening day whether it would still start public services in light of the Coronavirus restrictions. However, the final decision was made to press ahead as planned to try and make sure that essential journeys can still be made by key workers.

Whilst it have been the lowest key launch of a new service for the obvious Coronavirus reasons the Manchester Metrolink network now consists of 99 stops (if only Mosley Street hadn’t closed we’d have had a nice round 100!) with over 100km of track in operation.

Please note all photographs featured in this article – and a forthcoming Gallery – were taken with the photographers adhering to social distancing advice. This included not travelling on the trams and keeping distance from others when taking photos. At British Trams Online we urge all readers of this website to take into account all government advice if thinking about going out at the present time. 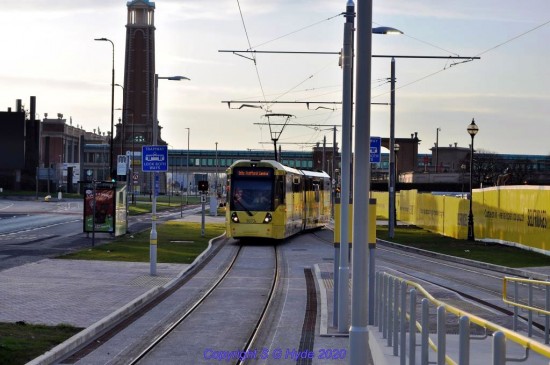 At the intu Trafford Centre at around 06:50 we see 3073 arriving on the first public journey from Cornbrook. The reception was understandably very low key with only a few Metrolink staff in evidence. 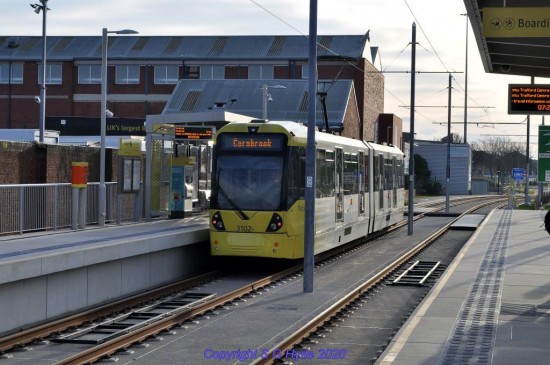 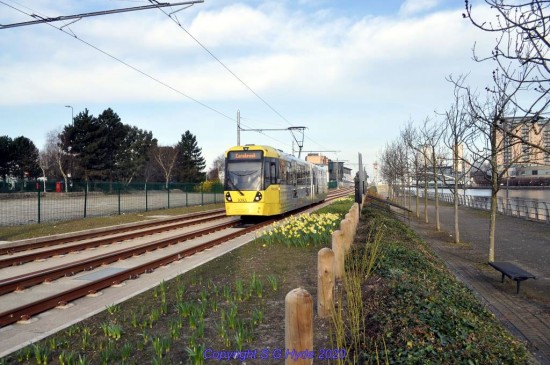 Running alongside the Manchester Ship Canal 3092 approaches Wharfside on the newly landscaped canal side walkway. (All Photographs by Steve Hyde, 22nd March 2020)