When the Midland Metro T69s were sold off at e-auction it was announced that three would survive with 11 being donated to Birmingham Museum for eventual display, 16 being kep at Wednesbury for possible use as an engineering tram and 07 which was donated to UK Tram for testing purposes. The remaining 13 were said to have been sold for scrap with the majority of them being transported from their storage location of Long Marston to Rotherham in May 2018. However, one further T69 didn’t make the journey and has remained in situ at Long Marston although the reason for this change in plan is unknown. Glyn Williams captured the following the image of the tram. 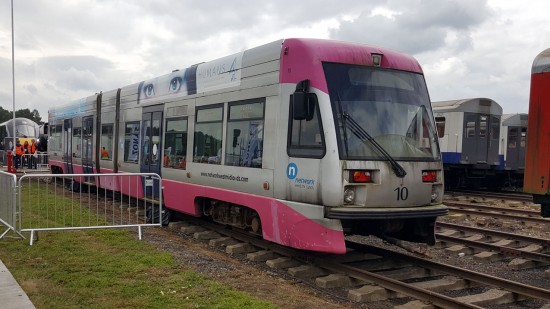 10 sits on the tracks at Long Marston during the recent Rail Live event. Along with various other items of rolling stock the tram was photographable and despite the fact it is dirty and is missing the front lower panelling it still seems mainly intact and still features adverts from last time it ran in service (do they quality as period adverts yet?!) (Photograph by Glyn Williams, 19th June 2019)