In the third of our series of guides suggesting ideal photographic locations on tramways within the British Isles, Edward M Koehler takes a look at the Crich Tramway Village. Home of the National Tramway Museum many who read this website will be well aware of this location but here Edward gives the observations of a first time visitor taking a look at where best to get photos of those all important trams.

I have only been to the National Tramway Museum once, but it was for three days in a row and on two of these days the Tramway Museum Society was celebrating the Fiftieth Anniversary of electric tramcar operation at the site 13th and 14th September 2014.  The third day was Monday 15th September 2014 where during some quieter moments I was able to capture additional images of this fine museum.  Do note that we will not be focusing on the National Tramway Museum’s collection in this writing; just suggestions where to best capture images of it.

Entrance to the National Tramway Museum is from the parking lot, this brings the visitor to the Victoria Park tram stop which is near the middle of the demonstration trolley line at Crich.  I would suggest that a visitor turn left after descending the bank from the entrance building and walk under the Bowes-Lyon Bridge into the Tramway Village area of the museum.  Do notice the Blackpool and Fleetwood Tramroads cornerstone in the retaining wall on your right.  Further down on your right are the entrance gates to the museum’s car depot. 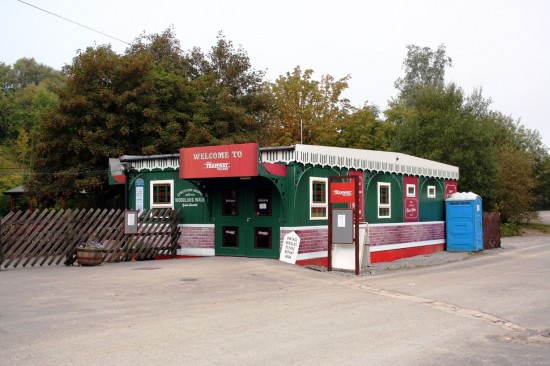 The entrance building at Crich. 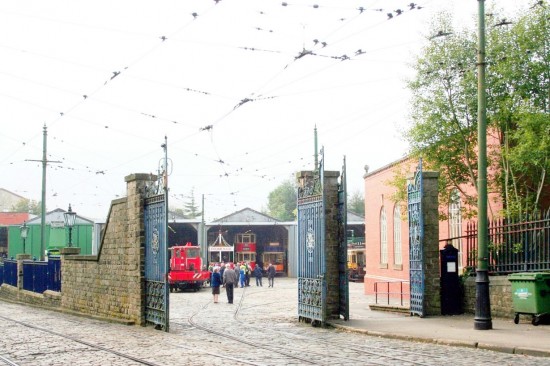 The depot entrance with a number of trams visible both in the depots and in the yard.

Also located here across the depot fan is the Tram Exhibition Building.  Curiously I never got an image of either the car depot or the exhibition building; I did concentrate on images of the cars.  The street area outside of the car depot is alternatively called Stephenson Place or Town End.  The connection to George Stephenson is both deliberate and direct; he was an investor in the metre gauge railway that originally occupied the formation that the tram tracks are laid upon.  The Tramway Museum Society has gathered up a number of buildings, or the facades of them to decorate the streetscape at Town End.  We’re about tramways here so we will just mention it but do pay attention to the backgrounds of the images in this area.  The first location we will visit is the Stephenson Place stop where we will board a tram for a trip to Glory (Mine).  I would suggest that you wait for an open top tram if one is in service and of course, sit at the leading end of the upper level. 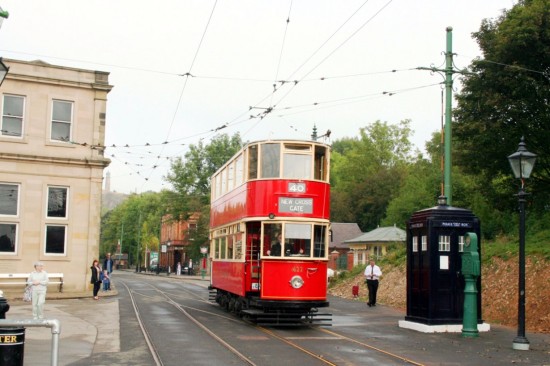 Not currently part of the operational fleet back in 2014 we see London Transport 1622 approaching the Town End terminus. 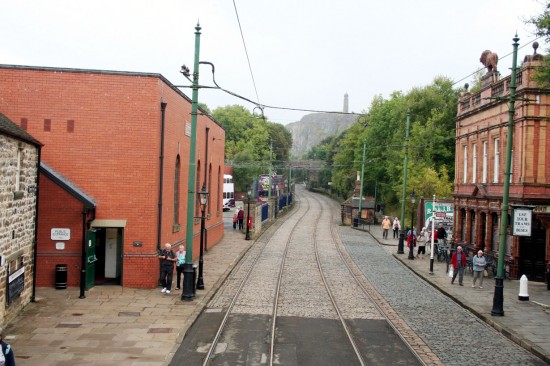 A view from the top deck of a tram as it starts off on its journey north. The Red Lion pub is on the right with the Workshop on the left. You can also see a couple of trams in the depot yard.

The car soon departs and one of the first major buildings passed is the Red Lion Pub; this is the façade of a building that once stood across the street from a tram depot in the Stoke-on-Trent. 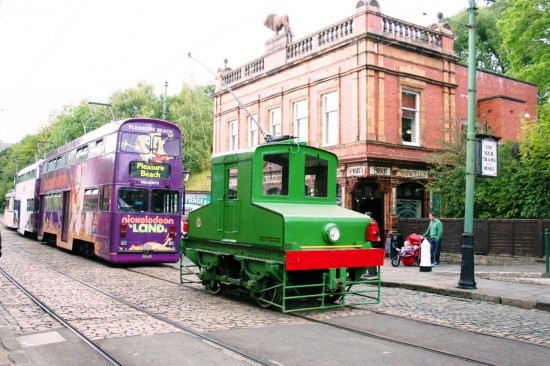 You can tell its a special event with the Blackpool Electric Locomotive out on the main line. With fellow Blackpool trams 762 and on loan Balloon 711 behind the scene is completed by Berlin 223 006-4.

Further up the line the former weighbridge office of the mineral railway still stands next to the tramway, and then the line goes under the Bowes-Lyon Bridge.  The Tramway Museum Society recovered this structure from the Bowes-Lyon estate; the late Elizabeth Bowes-Lyon is the mother of Her Majesty Queen Elizabeth II. 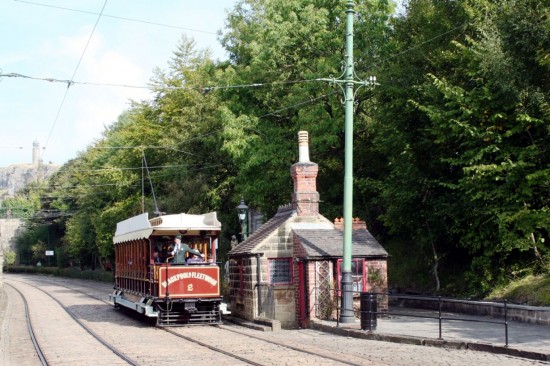 Another tram not currently part of the operational fleet but one of the starts of the Electric 50 event in 2014 is Blackpool & Fleetwood 2. 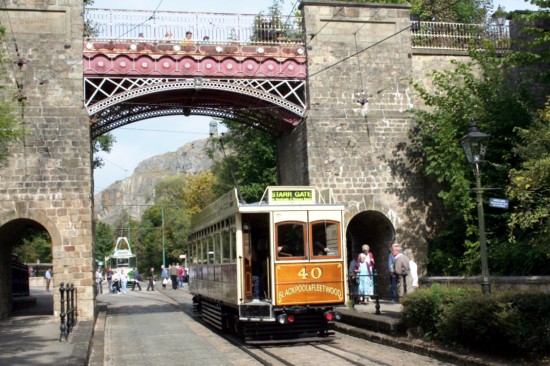 Blackpool & Fleetwood 40 visited Crich for the event during this visit and we see it heading under Bowes Lyon Bridge.

Once under the Bowes-Lyon Bridge the demonstration tramway comes into the Victoria Park area which is also where visitors enter the museum.  Here there are separate inbound and outbound platform with a level crossing between the two of them.  On days when antique or specialty vehicles are invited to the National Tramway Museum this is where they enter the museum area.  During the Electric 50 Celebration, Victoria Park is where the knowledgeable tramway enthusiasts gathered to photograph the procession. 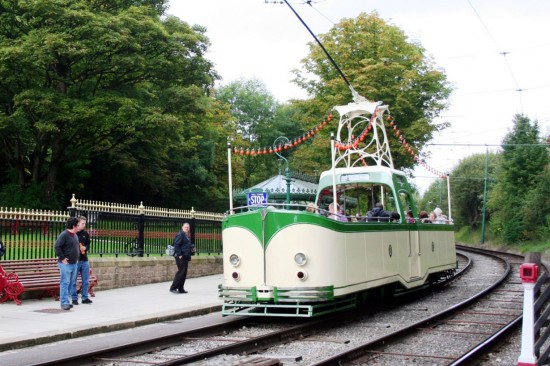 The demonstration tram line continues around a curve beyond Victoria Park and the line narrows to single track.  A single line token is available to the tramcar crew just before it reaches the switch where the inbound and outbound tracks join.  From the end of double track the tramway curves around to a location known as Wakebridge.  Before reaching Wakebridge thought there is a fixed signal requiring the driver to ring his gong. 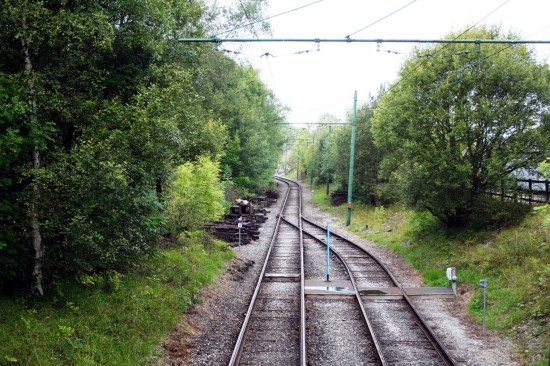 Where the double track changes to single with the blue pole in th centre of the shot being where the single line token is placed. 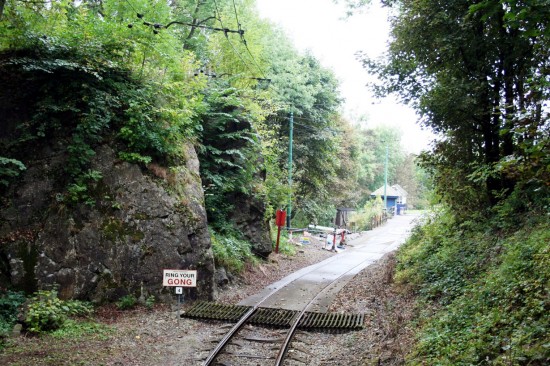 The immediate approach to Wakebridge from the south.

I have been told that in years past it there was a great vantage point from the top of the rocks to photograph trams but vegetation growth in recent years has obscured those opportunities.  The tramway to Wakebridge opened with the start of Crich’s 1963 season.  It is one of two passing places on the single track line to Glory Mine and is the site of the museum’s all important electrical substation.  At the Wakebridge station a local lead mining historical society has placed a number of exhibits of this industry around the station platform; they have even simulated the opening of drift mine with a battery powered locomotive coming out of it.  There are several passenger type shelters located in and around the tramway platforms.  Arriving at Wakebridge the driver surrenders his initial token, continuing to Glory Mine he picks up another. 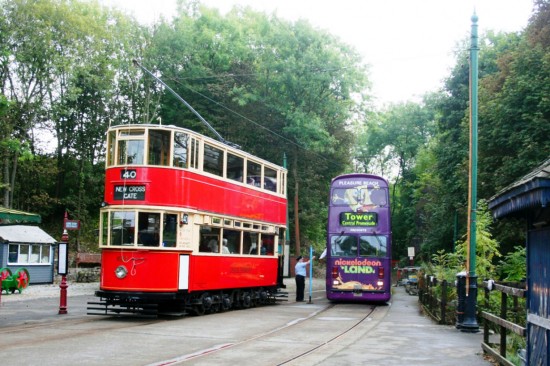 The single line token is transferred with London Transport 1622 and Blackpool 762. 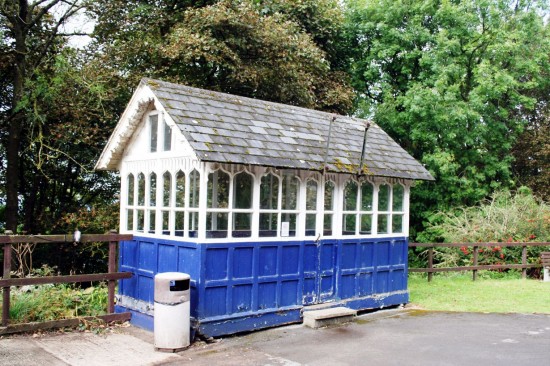 The old tram shelter is currently out of use.

The next and final stop for the demonstration tramway line at Crich is Glory Mine.  The line was opened to this location during July 1978 but developments on the site were not completed until 29th March 2014 when passengers were first allowed to detrain from the trams at this location. Just shy of the single track terminal there is a passing siding; the track arrangement at Glory Mine allows for a maximum of three cars to be at this location at a time. 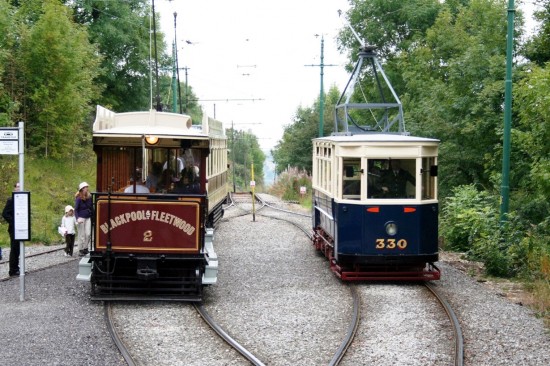 At Glory Mine terminus where 2 and Sheffield 330 are seen (as is Blackpool & Fleetwood 40). 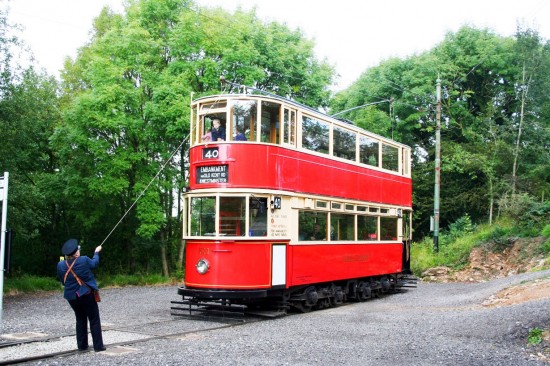 The trolley is changed on London Transport 1622 at the extremity of the line at Glory Mine.

Clearly the end of track. 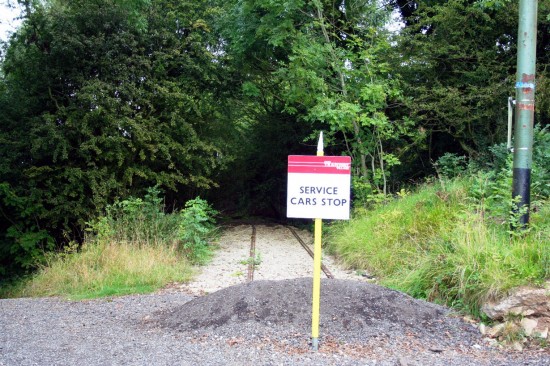