Halle 902 to move to Blackpool!

In one of the more bizarre news stories of the recent past, it has been announced that Halle 902 is set to move from Crich Tramway Village to Blackpool, for storage and occasional display at Rigby Road. The move is primarily to free up depot space at Crich, in order to assist with future projects and vehicle display.

Halle 902 first arrived in the UK from Germany in 2005, having been acquired by the Tramway Museum Society as a rare example of a double-ended PCC car. The car was intended to be modified for use as a second ‘Access Tram’ at the museum, with plans for a wheelchair lift to be fitted; however it was later determined that it was not well suited to this role for a number of reasons, including the low height of its ceiling and its huge appetite for power consumption! Despite this, 902 did appear in passenger service on a small number of occasions at Crich, but has spent over a decade stored in the depots with no apparent plans for its future.

Now, in order to free up valuable depot space at the museum, agreement has been reached for 902 to move to Blackpool for an initial loan period of two years. As far as is known, there are no plans for the tram to be returned to an operational condition – the move is simply a case of one heritage tramway helping another with a shortage of space. Although no exact reason has been given as to why the TMS need to move out the car, one possible explanation is the anticipated return of Blackpool Brush Railcoach 298 to the museum following a period of storage at Clay Cross. This tram is set to have its long-stalled restoration completed in the fairly near future, and will therefore need to be transported back to Crich so that the required work can proceed.

It is always nice to see organisations helping one another, although the loan of Halle 902 has so far generated a rather mixed reaction. It is perhaps a shame that this is the tram that has been chosen to go to Blackpool, as opposed to something more useful to their heritage operation – indeed, even a non-operational tram such as Blackpool Standard 49 would have surely been a much more welcome choice, as it could have been used to create some superb photo opportunities with sister cars 143 and 147, with the potential for a future restoration to running order if the loan was extended. It also remains to be seen whether a two year loan will actually achieve much, although presumably the TMS has its reasons for deciding on this which may well become clearer over time.

More news on this most surprising development will follow when the finer details have been agreed between the relevant parties. 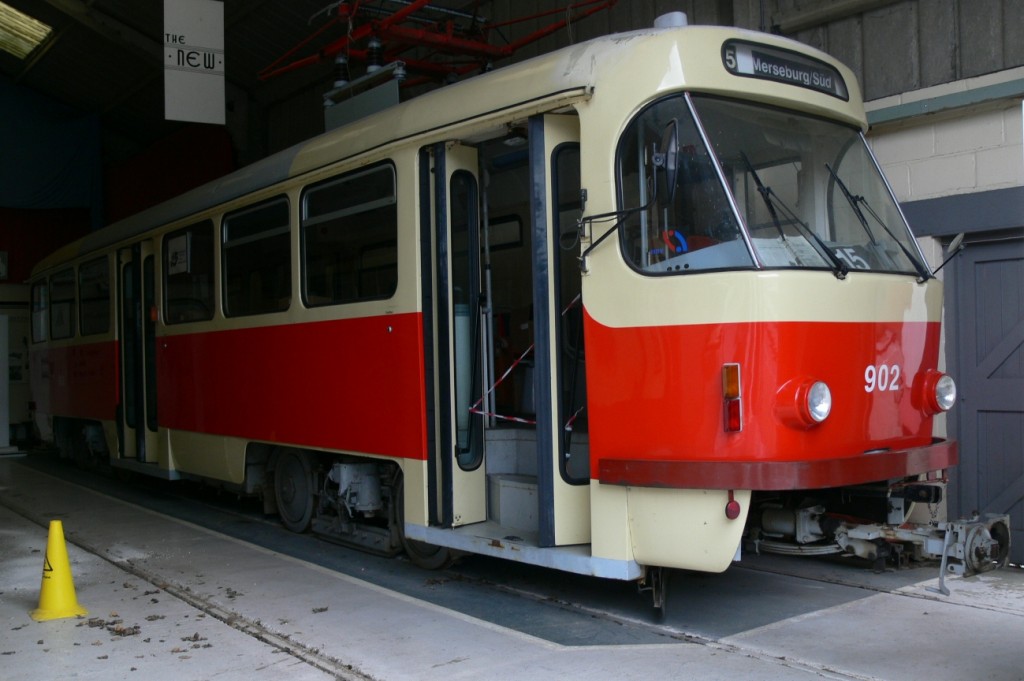 The sight of Halle 902 tucked away in Depot VI at Crich has become a familiar one in the last few years, but soon the tram will be heading for the seaside for a period of storage. Here it is seen doing what is usually does, i.e. not a great deal! (Photo by Andrew Waddington)

3 Responses to Halle 902 to move to Blackpool!