Posted on Saturday 8 September 2012 by Gareth Prior

The two Fleetwood Heritage Leisure Trust trams which are stored outside at Kirkham Prison are to be covered up to prepare them for the onset of the winter weather to try and protect them during their outside storage. The two trams stored outside at the prison are privately owned Twin Motor Car 673 and Centenary 641 with the former already starting to receive the heavy duty protection.

The work is currently being done by members of the FHLT with assistance from HM  Prison Service and it is hoped that the heavy duty cladding currently being place over 673 will help prevent water ingress.

The Fleetwood Heritage Leisure Trust and HM Prison Kirkham are also preparing for their next restoration projects with Brush Car 621 (284) the next tram likely to be subjected to major work and this is likely to involve both organisations in a similar fashion to that of Brush 290 which has become the Diamond Jubilee Tram and is now on display next to
Pleasure Beach loop as part of the 2012 Blackpool Illuminations. Recently extra signage has been placed along the protective fencing around 290 acknowledging the partnering
organisations involved in the project.

Speaking of 290 plans are now being formulated for the next stage for this tram, and if these plans are pulled off it will be a very rare appearance for a Blackpool tram in the south of England! The Trust are working with both Kirkham Prison and HMPS in a project which could see the tram displayed in London over the Christmas and New Year period – complete with illuminated features – under the theme “Northern Lights”. This is  potentially one of the most exciting things which has happened in tram preservation in the
south of England for a very long time as it is usually a barren desert for traditional trams and this writer for one would be delighted if it actually did happen!

Back to the Prison and space has been prepared within the Workshop where 621 is  currently situated and 290 was before for the top deck of an early Edinburgh tram. As previously reported on British Trams Online this tram has been gifted to the FHLT for intended use and display in the new Fleetwood Tram Museum and it is to receive attention at the Prison before this happens.

And onto the Fleetwood Tram Museum where the trustees of the FHLT are now finalising a Heritage Lottery Fund bid in partnership with Wyre Borough Council which will see a formal application submitted within the next few weeks.

Expressions of interest have been received from a major utility group, the Blackpool & Fylde College and HM Prison Kirkham in providing both sponsorship as well as practical
assistance in renovating the 1897 Depot structure and to transform it into a visitor heritage project next year.

Outline plans for the Museum would see up to seven trams on display with provision for a
workshop unit allowing the renovation on two trams to earlier condition. These plans would seek to avoid duplication of preserved trams both in Blackpool and with other Museum groups.

An appeal continues to be run to restore the depot’s frontage with doors leading on to four tracks inserted in the structure. This is being coordinated by local enthusiast and historian Steve Palmer.

With the Lancastrian Transport Trust finally moving their trams from Rigby Road this week and now with the FHLT revealing more of their plans this is certainly a crucial period of time for tram preservation on the Fylde coast and potentially very exciting. We at British Trams Online which all organisations involved the best of luck and hopefully in the months and years to come we will have lots of good news stories to report on as the
plans start to become a reality. 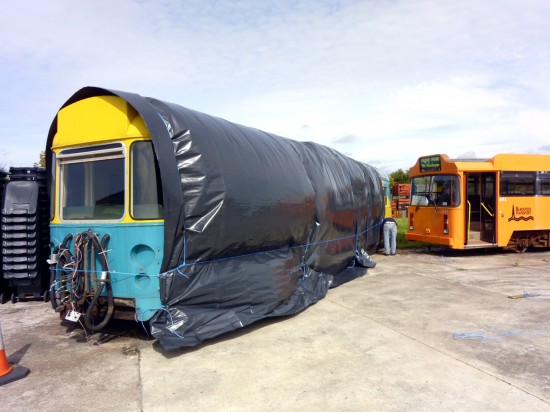 Work is underway at Kirkham Prison to cover up the two trams currently stored outside. This view shows the covering being added to Twin Motor Car 673 with Centenary 641 seen in the background. (Photo courtesy of Fleetwood Heritage Leisure Trust) 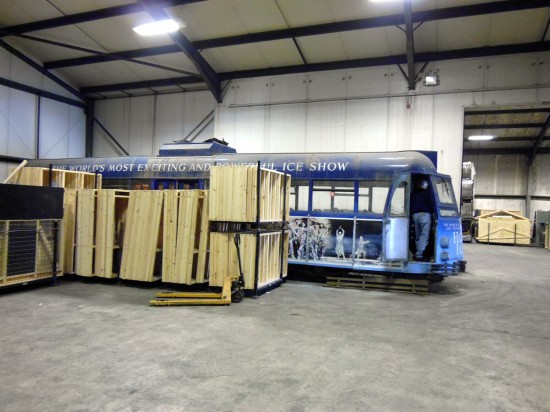 Inside the workshop at Kirkham Prison showing Brush Car 621 which remains stored but plans are in place which will see this tram restored in the future. (Photo courtesy of Fleetwood Heritage Leisure Trust) 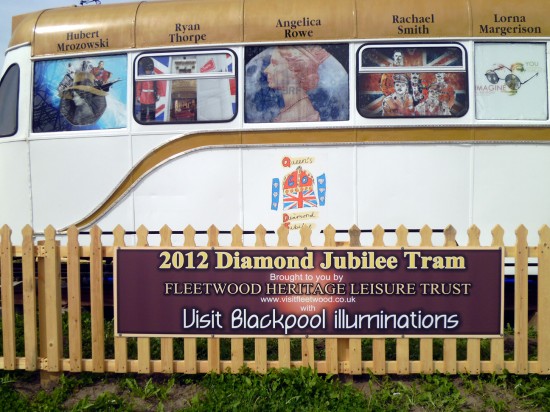