Midland Metro set to reach New Street from 22nd May

The sight of trams running through Birmingham City Centre as far as New Street station is set to become a regular occurrence following the completion of the first overnight tests of the section to there from Bull Street. As previously announced these first tests took place in the early hours of Sunday 24th April with Urbos 3 37 the tram in charge to ensure that everything was as it should have been. Providing that nothing untoward is discovered once the results of the tests are analysed Centro have now confirmed that passenger services to New Street station via Corporation Street will commence from Sunday 22nd May.

Phil Hewitt, Centro’s Midland Metro programme director, said: “This was the last big hurdle to overcome. Now that we have completed these crucial trials we are in the final preparations to start services down to New Street and Grand Central, with all the benefits that will bring to Birmingham city centre and the wider West Midlands economy.”

The test runs were able to take place during an engineering possession on the national rail tracks and had been announced in February with Network Rail fast tracking the application. As well as the standard testing as expected on a new tram line it was also imperative that the Midland Metro line does not interfere in any way with the Network Rail lines. Provided that no last minute issues are identified once Centro and Network Rail have reviewed the data these first tests now mean it should be all systems go for further testing, driver training ahead of that planned opening on Sunday 22nd May.

Ben Ackroyd, director of Midland Metro, commented: “This is great news for passengers. Our Midland Metro drivers are keen to start running the trams all the way down to New Street. They have been already learning the route on our simulator in the depot at Wednesbury. In the next few weeks, the public will see our drivers out in the training tram, getting ready to carry passengers on May 22.”

Construction work on this 1.2km extension between St Paul’s and New Street station started in 2012 with the first section (as far as Bull Street) opening in December 2015. Unfortunately despite hopes that the full line would be open at this time construction work was not sufficiently advanced so a delay was announced with works continuing in the first few months of 2016 which has seen the full infrastructure put into place although there still remain a few finishing works to be completed in the next month.

If everything goes according to plan trams will run all the way from Wolverhampton St George’s to New Street station from Sunday 22nd May with the stop at Corporation Street also opening on this date. However the stop at Snow Hill, which enjoyed a one weekend opening over Easter during the closure of the line to Bull Street, is not due to be finished by this date and will remain closed for the foreseeable future.

Once this line opens that won’t be the end of extending Midland Metro as work has already commenced on an extension from New Street station to Centenary Square (including the first use of battery operated trams) which is due to open in 2019. The same year should also see the Wolverhampton City Centre extension (running through to the railway station) open, although construction works for this have yet to commence. And in the future it is also hoped Midland Metro will reach Edgbaston via Broad Street and Five Ways (with funding already earmarked) and a route has also been identified running through to Digbeth from Bull Street via Albert Street, the HS2 station at Curzon Street, New Canal Street, Meriden Street, High Street Deritend, Digbeth Coach Station and the Custard Factory. It is hoped this would be open by 2023.

It might have taken a while but the expanded Midland Metro is coming! 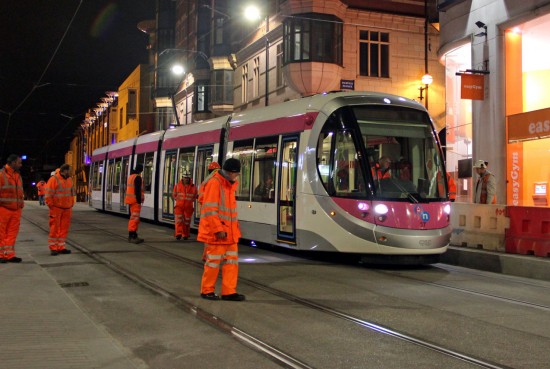 37 makes its first run down Corporation Street under the watchful eye of engineers. 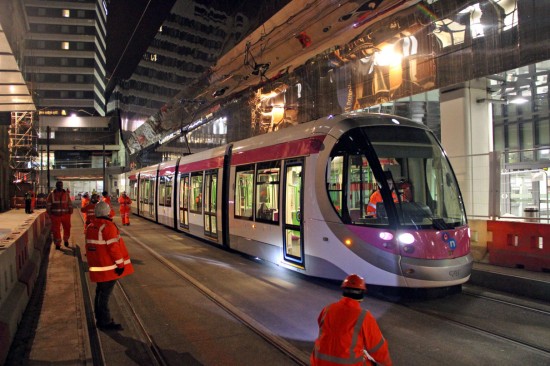 At the end of the first test run 37 stands at New Street station. 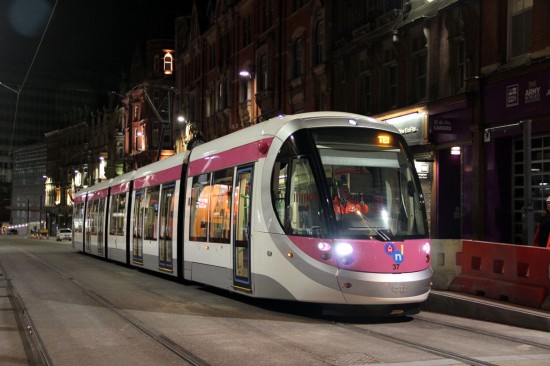 Another view of 37 in Corporation Street. This time the tram is running at operational speed following the succesful completion of the first slow speed tests. (All Photographs courtesy of Centro)