Crich – on the right track to the future?

The Tramway Museum Society’s 2015 Annual General Meeting was preceded by a discussion regarding plans for the future development of Crich Tramway Village and a series of interesting proposals to improve the visitor offer. A number of these will hopefully be in place by 2019, whilst looking further ahead, thoughts are turning towards some much-needed improvements to the museum’s tram depots.

Most regular visitors to Crich will have noticed that the last few years have seen increased efforts to make the site attractive to the general public with numerous improvements to visitor amenities. This should continue, and by 2019 it is hoped that a new outdoor play area for younger visitors will be open, along with new toilets and increased exhibition space. Following the opening of a proper tram stop at Glory Mine in 2014, it is intended to further develop the terminus with a shelter planned as well as a footpath back to Wakebridge alongside the tramway. Other plans include the provision of catering facilities at Wakebridge (the Octagon kiosk hasn’t been used for a number of years but presumably this may soon change), and most ambitious of all, the TMS hope to open a period school in order to expand the village aspect of the site. Hopefully this proposal will get further than the idea of a police station mooted some time ago, which was quietly dropped due to a lack of funding.

Longer-term, and even more optimistic, ideas which have been discussed include more evening opening, more traditional catering, and creating an authentic Edwardian street scene. The Society is also keen to explore the possibility of more community outreach projects to introduce the collections to a wider audience, including supplying trams for display in various towns and cities. This is nothing new of course; recent times have seen a number of cars including Grimsby & Immingham 14 and Southampton 45 leave the museum for short visits to events elsewhere.

Perhaps most importantly though, the depots at Crich are becoming a major talking point for members. It is well recognised that the present running sheds are barely fit for purpose; the issue of condensation is a particular concern and it is acknowledged that the trams within are not being adequately protected from the harsh winter weather. It is also felt that the lack of space between vehicles when the depots are full is less than ideal, and does not create a very welcoming environment for paying guests to view the collection of trams housed inside. Ideally a new depot complex, located away from the present facilities, would be the first choice option but this is likely to cost in the region of £3 million and may not be a realistic target. The main obstacle to upgrading the existing depots, is the problem of what to do with the trams whilst work is taking place. The displacement of trams from Crich to other locations at this time is one possibility which has been mentioned. Another, more radical idea is to cover over the depot yard; this would also increase available storage space, creating more scope to acquire more trams in the future and also offering the possibility of the new undercover space being made available for conferences and meals. The TMS also appear increasingly keen to exploit the potential appeal of an operating steam tram which would see the restoration of Manchester, Bury, Rochdale & Oldham 84 which is currently stored in kit form at Clay Cross, as well as the building of suitable facilities to house and maintain it. This could be something that would attract external funding as it would create a unique working exhibit and allow the national museum to demonstrate another aspect of tramway operations.

There are lots of other exciting ideas in the pot but as always, money is likely to be the deciding factor in how much of it actually becomes a reality, and when. Nonetheless it is good to see the TMS are playing host to constructive discussions regarding future plans and hopefully we can look forward to at least some of the above happening in the coming months and years. 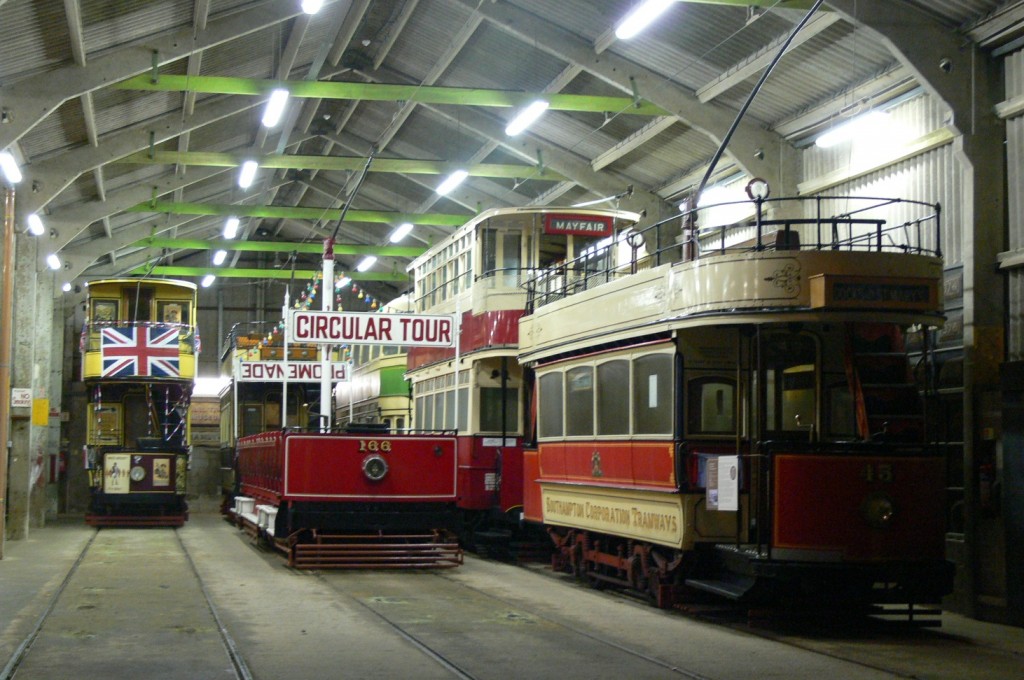 A recent view of the Crich depots seen at night, with Chestefield 7, Blackpool 166 and Southampton 45 most prominent. Although difficult to tell here, already trams are showing signs of serious condensation before winter has fallen, highlighting the need to improve the tramcar storage facilities at Crich to conserve these irreplaceable vehicles. (Photo by Andrew Waddington)

21 Responses to Crich – on the right track to the future?