Today Picture in Time is back in Blackpool as we take a look at Pleasure Beach loop in 1993, a time when it was not uncommon to see a large number of trams waiting to form specials along Blackpool Promenade. It may only be 22 years ago but once again things have changed in a relatively short time frame so let’s all get nostalgic once again.

The upgraded Blackpool Tramway now sees the vast majority of timetabled main service journeys operate from one end of the tramway to the other but in the “good old days” operations were very much different with Pleasure Beach often being the southern turning point for trams from the north and the loop here could often be found with several trams waiting for the Duty Inspector to send them on their way to Tower, North Pier, Cabin, Bispham or beyond.

Our two views of the old Pleasure Beach loop – when there were two full loops plus a spur so trams from Starr Gate could access the loop directly – were taken during 1993 with the first view showing three Balloons led by 722 (or more exactly trailed by) and Boat Car 606 on 12th June 1993. 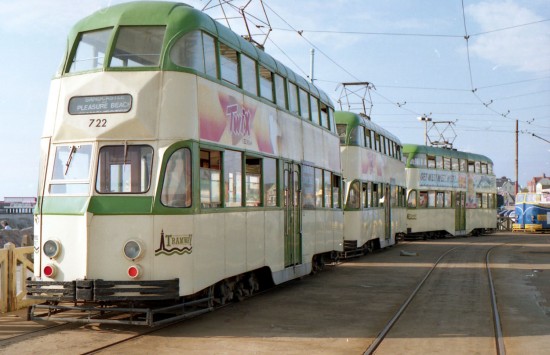 Then we move on to 31st August of the same year and we can see six Balloons in evidence, including five on the loop. 700 and 703 are seen nearest the camera with all of the Balloons having the T-side adverts affixed with 1993 obviously being a good year for Twix Ice Cream! 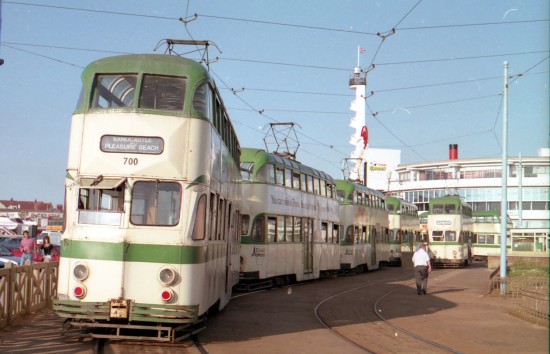