Posted on Thursday 31 May 2012 by Andrew Waddington

The North Eastern Electrical Traction Trust recently confirmed their purchase of Blackpool Centenary car 647 following its withdrawal by Blackpool Transport at the end of 2011. 647 is undoubtedly a very important tram as it represents the very last traditional standard-gauge passenger tram built in the British Isles. However, in its current condition the car has never carried a proper fleet livery, making the choice of livery to preserve it in a dilemma for its new owners.

647 last ran in green and cream prior to the application of an all-over advert for the short-lived ‘World of Coronation Street’ attraction in 1996. Since then its appearance was drastically alerted in 2003, when it was modified with a radically different end profile to eliminate the expensive curved driver’s windscreens, which were prone to cracking. In this condition it has carried two further advertising liveries, for Tiffany’s Hotel and latterly B & M Bargains, and had two stints of operation in plain yellow in-between advert contracts.

Rather than simply choose a former green and cream livery to apply to 647 in its present rebuilt shape, or carry out a costly restoration back to its original condition, NEETT have taken a rather novel approach and are inviting enthusiasts to design a suitable livery for 647. The group have launched a competition open to all, to create a livery that will reflect Blackpool’s tramway heritage, but which will also suit the Centenary car in its current condition. A prize will be offered to the eventual winner whose design will be replicated on the real tram, once it moves to its new home in the North East.

Anyone wishing to take part in this contest, and potentially play a part in tramway history, can email info@neett.co.uk to join in. Designs are welcome in two formats – scanned drawings, or using Photoshop software. The competition is being run in connection with the ‘Trams Today’ Facebook page – see http://www.facebook.com/#!/pages/Trams-Today/144002195699684 for further details. It is also hoped to show off some of the designs under consideration there in the future.

We must emphasise that the intention is not to recreate a former Centenary car livery, although entrants may well wish to use green and cream as the basis of their designs. However, other colours will be equally welcomed. For those who would prefer something a bit more authentic, one day 647 could potentially be restored back to its ‘as-new’ appearance – but for now though, it’s over to you! 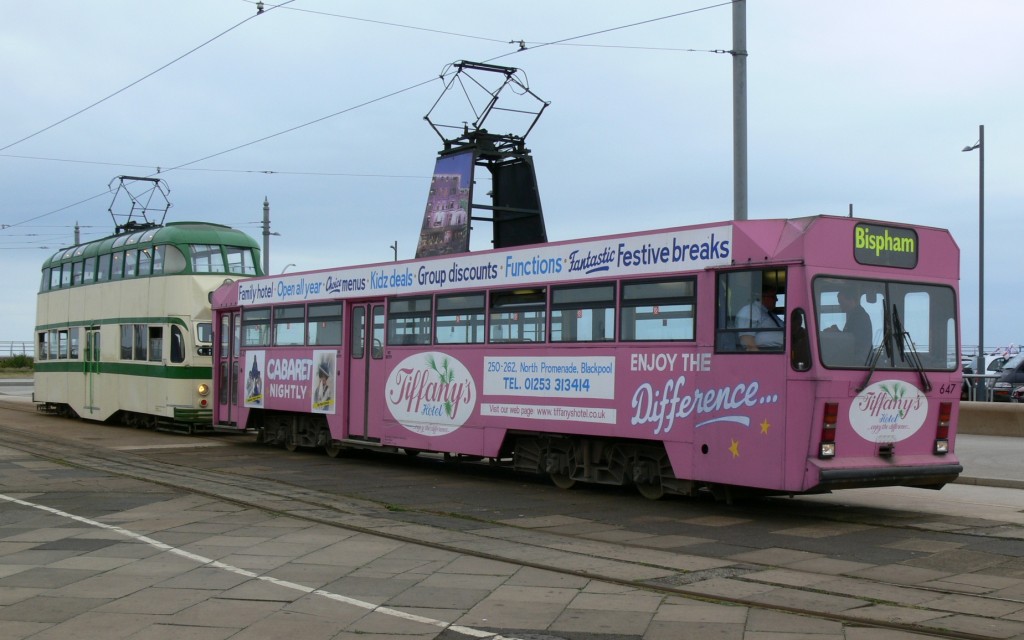 An archive shot of 647 sharing the Pleasure Beach outer loop (before it was remodelled) with Balloon 703 in 2006. The tram is seen in its pink advert livery for Tiffany's Hotel. (Photo by Tony Waddington)

2 Responses to Enthusiasts invited to design a tram livery!