Posted on Wednesday 24 November 2021 by Gareth Prior

Scottish Rugby once again have an advert on Edinburgh Trams with a revised design having been added to a different tram. That tram is 261 which hasn’t had any external advertising since it lost vinyls for Standard Life in March 2020.

Being applied just after the Autumn Internationals at Murrayfield Stadium have ended, 261 was noted in service with these new ads on 24th November. Keeping the same As One slogan this design is a bit more inclusive as it includes both male and female rugby players on the full height adverts and also includes the latest shirt on these photos. The tartan background of the old advert is also replaced by a plainer design.

Although this is just the third commercial advert for 261 (CR Smith and Standard Life) it is actually the seventh different design on the tram as it was used from December 2016 to September 2017 for various Edinburgh Trams promotions and extoling you to use the tram to get to them. This included an advert from February to May 2017 which told you to “Try the tram to Murrayfield” so its back to rugby for the tram after 4 and a half years!

The previous Scottish Rugby tram – 275 – remains in the mainly white livery as we recently featured on these pages. 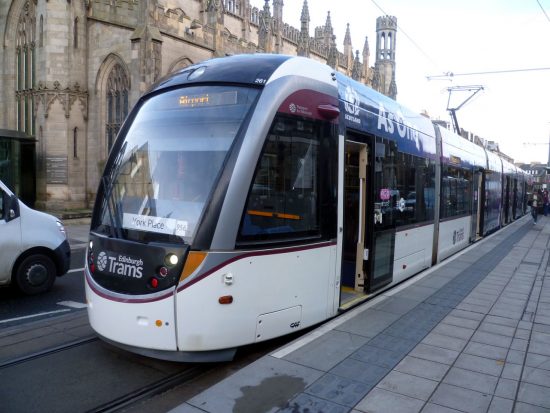 261 stands at York Place ahead of departure to the Airport. The manual board in the lower section of the cab window is yet to be turned. 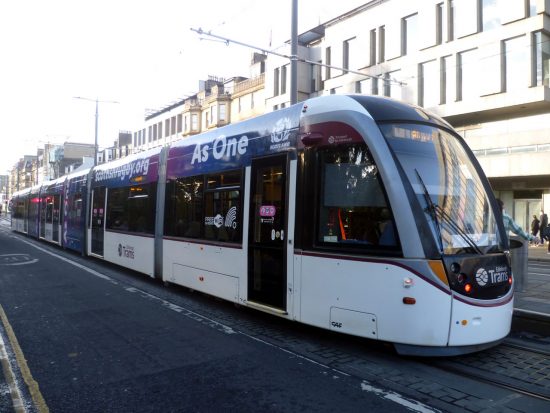 Princes Street for this view of 261 as it heads off to the Airport. 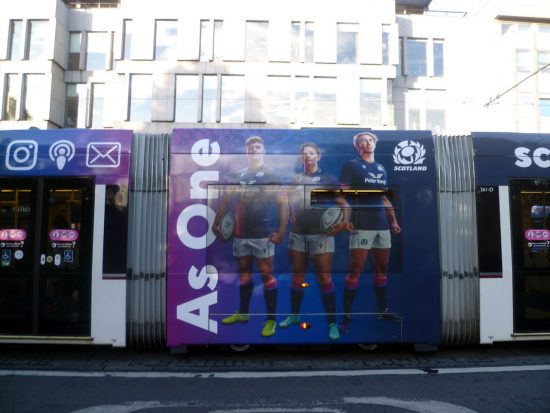 The full height advert showing the male and female rugby players who are “As One” (except one hasn’t been given a ball to pose with!). (All Photographs by Roy Calderwood, 24th November 2021)