Plans revealed for new halt on the Seaton Tramway

There could be a new stop on the Seaton Tramway if plans for a halt adjacent to Seaton Wetlands are approved by the council. It has been an aspiration for a while to give better access to Seaton Wetlands and these plans are part of a wider masterplan which is currently being drawn up.

The halt would be located at Swan’s Nest loop between Riverside Depot and Colyford which would give excellent access to the extensive Seaton Wetlands site which has been developing into a major tourist attraction in its own right in recent years. It would be the first new stop opened on the line since the temporary Riverside Depot was put in whilst the new Seaton terminus was constructed in 2017-18, although that one has not been used on the standard timetable since the new terminus opened. However, of note is that the 2020 timetable published on the Seaton Tramway website gives times for both Wetlands and Riverside with an extended end to end journey time of 27 or 29 minutes depending on the colour timetable (previously 23). Speaking of the timetable the Red service for 2020 looks set to be every 15 minutes instead of every 20, the most intensive timetabled service for some time on the tramway. It also gives a tantalising glimpse that there may be a Gala weekend as its on the key but then its shading isn’t shown on the calendar!

Back to the main feature of this article though and the planning application that has been submitted to East Devon Council includes the following notes: “It has been a long-held ambition to provide a direct link from Seaton to Seaton Wetlands by using trams as the connecting piece. This creates a safe and reliable link to the existing Wetlands infrastructure. The current Tramway arrangement does not allow for trams to stop at this location. Therefore, it is proposed that a new timetable tramstop is created at the existing Swan’s Nest ‘passing loop’. The new tramstop would allow passengers to alight from the tram and access directly onto the Wetlands and enable visitors, including people with physical disabilities, to get off the trams and explore this stunning natural environment.”

The proposed timeline would see works commence in 2020, although this is dependent on both approval from the Council and full funding being in place.

The wider masterplan would seek to create a new circular walking and cycle route around three of the most popular attractions in the town – namely the tramway, Wetlands and Seaton Jurassic. It is hoped that the whole project would make it easier for visitors to combine all three in one visit.

This looks set to be an exciting development for the tramway in its 50th anniversary year which should not all provide extra passengers for the trams but also give a few more photo opportunities of the trams in operation! 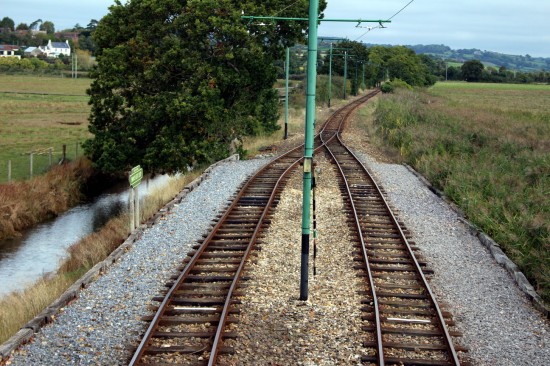 Swan’s Nest Loop where the new stop will be constructed. Looking towards Colyford from Seaton. (Photograph by Gareth Prior, 28th September 2018)