In Pictures: 4040 returns to service on Tyne and Wear Metro

Posted on Saturday 21 September 2019 by Gareth Prior

Whilst we have been concentrating on the new Tyne and Wear Metro fleet currently being procured we mustn’t forget the current fleet which continues to operate the service. Shortages of the Metro Cars are often seen with peak time extras unable to run which does mean that some of the unrefurbished vehicles are pressed into service at times. The four which weren’t refurbished were 4001, 4002, 4040 and 4083 with 4040 recently seen back in service for the first time in 2019.

Coupled with fellow unrefurbished train 4083 (they can only run amongst themselves), 4040 was running on peak time extras on 18th September. As for 4083 this is the only Metro Car not to carry fleet livery with a long-standing advert for Emirates Airline instead being carried. The two prototype vehicles 4001 and 4002 have also not been seen for a while with the former last noted in May and 4002 in April. 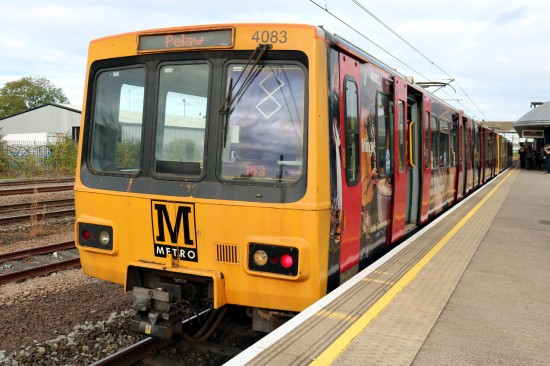 4083 in Emirates livery with 4040 at Pelaw with a peak time extra which terminates here. (Photograph by Trevor Hall, 18th September 2019)