Posted on Thursday 26 April 2018 by Gareth Prior

We have fascinating view of how trams were moved by road in days gone by as we take another look into the archives in Picture in Time.

The tram seen here is Leeds Feltham 501 which is one of three Felthams to have survived into preservation. Built for Metropolitan Electric Tramways as 355 it was renumbered as 2099 upon the creation of London Transport and then became one of the trams to be sold on for further use in Leeds. Arriving in 1949 it was soon pressed into service and remained in Leeds until the end of tram operation in Leeds in 1959. 501 was secured for preservation and was transported from West Yorkshire down to London for the Museum of Transport in Clapham in 1960. Today 501 has become 355 once again and is part of the London Transport Museum collection although is not at the main Covent Garden site being at the Acton store.

This may not be the clearest photo of the tram but clearly shows 501 posing for the camera with the Pickfords lorry at the front. Also posing are the crew transporting the tram which includes Jack Baines from Leeds. 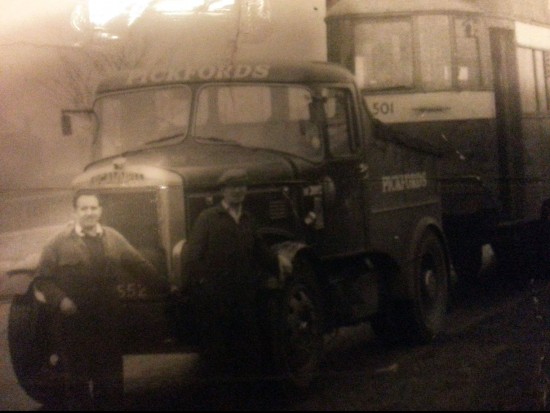