Good progress made in raising funds for bus for Crich

Posted on Wednesday 14 March 2018 by Gareth Prior

£12,000 has already been raised by the Tramway Museum Society towards their £65,000 target to be able to purchase the 1913 built Barnsley & District motorbus. As we reported previously this bus – numbered 5 – has been offered to the museum at cut price by Mike Sutcliffe and will add a vital part of the story of trams to the collection.

No. 5 was used on a trial tramway replacement service operated by Barnsley & District Electric Traction Company and was later under the ownership of the British Electric Traction Group who also operated a number of tramways across the country. A charming period vehicle it will certainly look at home amongst the trams at Crich and indeed has visited before and will do so again in 2018.

It will be at Crich for the Leyland Society’s 20th anniversary celebrations on 8th July and will be staying for a little while to allow the museum to promote their campaign to purchase the bus outright.

Details of how you can donate to the fund can be found at https://www.tramway.co.uk/contact/make-a-donation/ where you can make an online donation. Not only can you donate to this project but there are also numerous other campaigns ongoing including the restorations of LCC 1 and Newcastle 102.

* You can see the bus in action during the 2007 London Bus Rally at https://www.youtube.com/watch?v=jLtmkEtbeQM (courtesy of Bob Hodges). 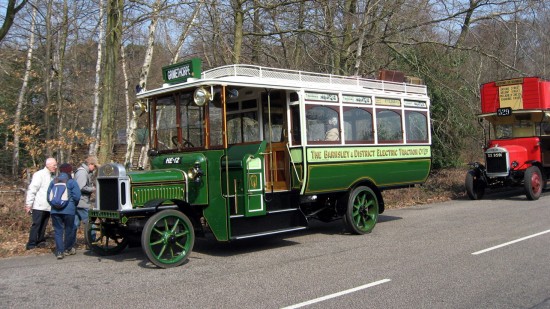 The bus is seen here on 10th April 2007 at a London Bus Museum rally where it headed up a parade of vintage buses. The location of this was the former MOD test track at Longcross near Chobham in Surrey. (Photograph by Bob Hodges)